Pride Month and the World Cup

Pride Month is a time of celebration and love for the LGBTQ community in the United States. It is recognized as an opportunity to embrace diversity under the summer sun, similar to how the FIFA World Cup is perceived around the world, and at first glance, it seems fitting that the 2018 World Cup has partially coincided with Pride Month. Unfortunately, what is supposed to be a welcoming atmosphere of different countries coming together for their love of soccer has turned into a time of needless discrimination for members of the LGBTQ community, both within the United States and outside of it. A simple change in worldwide education could be key to the end of this prejudice and the enjoyment of global events for everyone.

Significance of the World Cup

Ever since its start in 1930, the World Cup has been acknowledged as a way for people around the world to embrace their patriotism, as well as show themselves off in an accessible, widely-popular sport. It is no surprise that such a successful tradition would have a core set of values built into its foundation. Determination, friendship, skill, pride—all of these qualities and more are poured from the hearts of players and spectators alike as they pray for the title of champion. This is what keeps the fans invested and the hype alive to this day.

So, what happens when these qualities and values are thrown out the window? Can the World Cup in its very essence truly thrive if these things start to fade away? Once discrimination and hatred come into play, a picture-perfect World Cup has the potential to crumble along with the pride it was founded on.

With the World Cup being held in Russia this time around, the regime’s strict laws that prohibit LGBTQ expression have led many spectators in the community to feel unsafe and unwelcome during the soccer matches. For instance, a Diversity House in Russia that was meant to be a safe space for LGBTQ spectators to watch the World Cup has been forcibly shut down. Although people have been assured that LGBTQ fans will be safe for the duration of the tournament as long as they do not publicly express their sexuality, the anti-gay actions by the Russian Government are leading to consequences that could change the game entirely. And the lack of input from FIFA, an organization that is supposed to be an ally of the LGBTQ community, is only fueling the flame.

The natural human response to discrimination is to question and fight against it. Protest has been seen already in the United States in the form of Pride Month; despite also being a time of celebration, the month of June serves as a chance for the LGBTQ community to march for their rights and protest discriminatory policies still active in US society. With the way things are headed, it is possible that both Russia and FIFA will face similar tension in the near future.

People are even being encouraged to support teams based on how their respective countries treat the LGBTQ community, and it is possible that this attitude could lead to a protest of the tournament altogether in the future. A World Cup without the values it is supposed to represent is a World Cup people may not want to be a part of anymore. Change is necessary for not only Russia and the United States, but for many of the other countries participating in this global event.

The addition of LGBTQ education to the school curriculum is a topic that is controversial on its own. While learning about sexual health and self-expression is important to the development of young students who may identify as LGBTQ, it would be simply impossible by today’s standards to implement this sort of specific education all around the world. In many countries, it is still illegal and punishable by death or imprisonment to be LGBTQ. If a government will not allow someone who is LGBTQ to live a normal life, it follows that they would unfortunately not allow their citizens to learn about different sexualities.

But education does not have to be specific or explicit to make a difference. Instead, simply emulating the positive qualities that are celebrated during Pride Month, for example, in education around the world could be enough to at least ease the tension. Teaching students to love and embrace the unique attributes in themselves and in others, even when presented in a general context to the learning environment, could result in students around the world growing up to be more open-minded and accepting towards others in the future.

At the end of the day, it is the qualities between people that ultimately determine how they will get along. When turned to targeted oppression, the consequences can be tense and ugly, as demonstrated by many of the occurrences surrounding the 2018 World Cup. If the opportunity to celebrate and enjoy something with millions of others around the world is taken away because of prejudice, people will not just sit on the sidelines without a fight. A change in the perception of diversity is absolutely necessary to the continuation of the friendly, positive qualities of the World Cup and other global affairs. If pride and love are taught and practiced, pride and love will be the center of worldwide interactions for years to come.

[Image Attribute: Wokandapix]
Disclaimer: The views and opinions expressed in this article are those of the author and/or student and do not necessarily reflect the official policy or position of United 4 Social Change Inc., its board members, or officers.
Tags:LGBTlgbtqPrideMonthWorldCup
Previous post 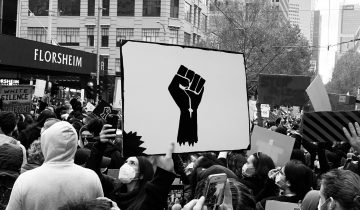