Environmental Awareness Will Begin at The Tip of a Straw

How Much Plastic Do We Use?

If you enjoy the modern conveniences of life, then it should come as no surprise that plastics appear everywhere. With over 300 million metric tons of plastic being produced annually, there are plenty of opportunities for plastic to find its way into the environment as waste. Even with various methods of “proper” disposal, 91% of the total plastic produced still ends up as trash.

This realization inspired a team of scientists to analyze the total human production and disposal of plastics since its manufacturing during the 1950s. From their study, they were able to calculate that by 2015, approximately 8.3 metric tons of plastic was produced, 76% of which ended up as waste. Of that 6.3 billion metric tons of waste, 79% ended in landfills or natural environments, 12% was incinerated and only 9% was actually recycled. The team was also able to predict that by 2050, approximately 12 billion metric tons of waste will find its way into landfills and natural environments.

Impact of Plastic on Wildlife

The true problem with plastic lies within its inability to quickly decompose. Once plastic items end up in landfills, they can take up to 500 years to decompose, after which they can then potentially pollute the surrounding soil or water. In that excessive time, plastics exist as objects constantly subjected to erosion and fragmentation. Eventually they can take on the shape of tiny particles, termed “microplastics”.

It is estimated that there is already 165 million tons of plastic debris freely floating in the ocean. This waste takes on a variety of forms and its damaging effects on marine life can range anywhere from choking, ingestion, or to entanglement. A well known example of such an event is a popular video on youtube of a marine biologist attempting to relieve a turtle of length of straw firmly stuck in its nostril.

Too often, the smaller pieces of plastics are mistaken as food by aquatic life. When ingested, the plastics are capable of causing a gut blockage, ulceration, gastrointestinal perforation and eventually death. Even if the plastics make it to the stomach without causing serious physical damage, the object will remain undigested and can provide a false sense of fullness which could ultimately lead to starvation.

With increased public awareness about the adverse effects of plastic on the environment, popular business names have decided to modify the use of plastics from their establishments. Starbucks intends to introduce a newly designed lid, composed of polypropylene (a more eco-friendly alternative), that would compensate for the removal of straws.

Following Starbucks’ decision, the hotel chain, Hyatt, plans to phase out single-use plastic items such as straws and drink-picks. Their plan to reduce their impact on the environment has been an ongoing effort since 2014 with their “2020 Environmental Sustainability Vision.”

The initiatives of these companies is a significant step towards reducing overall plastic waste and improving our influence on the environment. By limiting the the amount of disposable plastics at their establishments, they can encourage customers to consider materials outside of plastics.

Impact of Plastic on Human Health

Not only do plastics pose an obvious threat towards wildlife, plastic additives are continuously being studied for possible human health hazards. One major concern is the use of Bisphenol A (BPA) in certain plastics and resin coatings. While the health risks of BPA are heavily debated, many scientists consider BPA to be an endocrine-disrupting compound.

Mimicking BPA’s endocrine-disrupting properties are phthalates, a group of compounds that can be found in a wide range of plastic products. Despite their popular use, when compared to BPA, phthalates are much more prone to leaching when repeatedly used. Fortunately, phthalates are rapidly metabolized so the time spent in the body is relatively short. As these chemicals are more closely studied, scientists are finding more evidence and reasons to believe that we would be better off with less exposure to these plastic additives.

Do We Need Plastic?

One popular alternative is bioplastics, a substance derived from plant based materials such as starch and cellulose. In theory, their use should be better for the environment because they’re essentially derived from natural materials. Unfortunately, “natural” does not always directly translate to “better”. Depending on the environment in which bioplastics end up in, they can actually take longer to degrade in comparison to their plastic counterpart. This fact makes their use controversial, as they can provide relief to some of the current problems, but can also introduce new problems.

The most effective solution to this problem would be to consider materials outside the domain of plastics. With digital shopping, it‘s easy to discover plastic-free products as a replacement for specific items. Admittedly, some conversions are more difficult than others but that’s a problem to be tackled by creative persistence.

A transition from plastic can simply be opting for glass when purchasing food containers or even bringing your own reusable canvas bag when doing grocery shopping. It’s a matter of being aware of how we use and dispose of plastics so that we can make proactive decisions whenever possible.

If we consider the constant prevalence of plastics in our surroundings then it becomes clear just how dependent we currently are on this versatile material. The importance of plastics in the functions of everyday life is undeniable.

The recent decision of these big corporate names is an important step towards changing our current relationship with plastics. Most plastic products are created with the intention of being used only once and immediately thrown away. A consequence of this is a half-minded use of certain plastic products and their inevitable fate of ending up in landfills.

At this point, the use of plastics is essentially engraved in consumer culture and a vital component in certain industries. The only solution to this problem is a slow and collective process of steadily removing plastics from widespread commercial use. As a consumer, we all have the ability to promote this change by making an effort to gradually avoid plastics and embrace alternative materials wherever practical.

Disclaimer: The views and opinions expressed in this article are those of the author and/or student and do not necessarily reflect the official policy or position of United 4 Social Change Inc., its board members, or officers.
Tags:microplasticsplasticwildlife 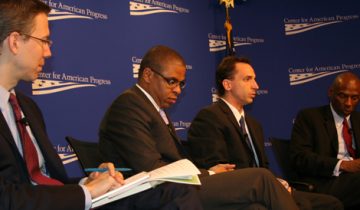