Humanity First: Why it’s Crucial that the US Embraces Globalism

More than 25 years ago, then-Senate Majority Leader Henry Cabot Lodge delivered a powerful speech about America’s robust position in global politics, arguing against the United States entering President Wilson’s proposed League of Nations. Lodge began his speech by proclaiming that “the United States [was] the world’s best hope” (Henry Cabot Lodge, League of Nations). However, Lodge believed that the United States’ role as “the world’s best hope” was not to involve itself in the diplomacy of the rest of the world, but rather to serve as an example of democracy and liberty.

Lodge went on to claim that “if you fetter [America] in the interest through quarrels of other nations, if you tangle her in the intrigues of Europe, you will destroy her powerful good, and endanger her very existence. Leave her to march freely through the centuries to come, as in the years that have gone” (Henry Cabot Lodge, League of Nations). The fears Lodge raised following World War I, shared at the time by much of the Country, led to a period of ignorant, bordering on unethical, Foreign Policy.  As millions of Jewish people across the Atlantic were being slaughtered, the United States, sticking to its “America First” motto, resisted foreign engagement for more than two years after the start of the War.

Currently, we find ourselves at a critical period in World History. Last week Ally leaders, Winston Churchill, Franklin Roosevelt, and Joseph Stalin, convened at the Crimea Conference to discuss the state of Europe and their plans to ensure peace and liberty moving forward. Unsurprisingly, a significant part of the Crimea Conference focused on the demilitarization of Nazi Germany. In a jointly-published report, released after the conclusion of the conference, Ally leaders stated that “it is our inflexible purpose to destroy German militarism and Nazism and to ensure that Germany will never again be able to disturb the peace of the world” (Foreign Relations of the United States, 971).

However, perhaps the most important result of the Crimea Conference has been the commitment to creating a coalition of nations devoted to maintaining peace and liberty across the world. In the report, Ally leaders assert that “[w]e are resolved upon the earliest possible establishment with our allies of a general international organization to maintain peace and security. We believe that this is essential, both to prevent aggression and to remove the political, economic and social causes of War through the close and continuing collaboration of all peace-loving peoples” (Foreign Relations of the United States, 972). This message, co-sponsored by President Roosevelt, marks a much-needed 180-degree change in Foreign Policy in the United States as shaped under Senator Lodge.

Following World War I, the United States emerged as a clear world leader. But by resisting joining the League of Nations, we as a country turned our back on the rest of the world and heeded no attention to the rise of Nazi Germany. It is crucial now then that the United States does not make the same mistake twice. We have the opportunity to cement our Country’s status as a model of democracy, while we defend those whose fundamental rights to liberty and equality have been stripped from them by some oppressing force. Essentially, the United States has the opportunity to not just to appear powerful, but to use that power for good and, in doing so, realize its potential as “the world’s best hope.”

It’s important to note, however, that a more globally involved United States does not necessarily equate to more military intervention. Not only should diplomacy be favored over War in near-every situation, but simply put, we, as a world, have bled enough these past six years. The last thing we want is to send more troops into War to die. It is, therefore, vital that the commitment to peace made by the Ally leaders during the Crimea Conference is genuine.

Undoubtedly our powerful nations will clash over social, economic, and political issues; But, as the Ally leaders note in their joint report from the conference, “only with continuing and growing cooperation and understanding among our three countries and among all the peace-loving nations can the highest aspiration of humanity be realized — a secure and lasting peace which will, in the words of the Atlantic Charter, ‘afford assurance that all the men in all the lands may live out their lives in freedom from fear and want’” (Foreign Relations of the United States, 974).

The world is at a crossroads; and whichever path the United States goes down, many nations will follow. With that responsibility, it is our duty to protect across the world the democratic values we espouse, without becoming one of the imperialistic totalitarian regimes we’ve spent much of our history fighting against.

Disclaimer: The views and opinions expressed in this article are those of the author and/or student and do not necessarily reflect the official policy or position of United 4 Social Change Inc., its board members, or officers.
Tags:Crimea ConferenceLeague of NationsWorld War 2

The Case For/Against Tom Robinson - To Kill A Mockingbird 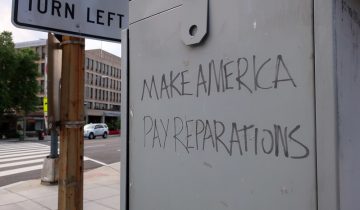