Everybody needs clean air; it is a necessity. Though it is critical to have clean air, about eight million people die each year because of air pollution. Every 1 in 9 deaths is due to the pollution from factories, fossil fuel mining, vehicles and so on. Almost 91% of the world’s population lives in places where the air quality is much lower than the WHO recommendation. The air pollution will get fundamentally worse as there is more growth of cities due to urbanization as well as overpopulation. If clean air is a human right, how would that change the world we know today? What is the price to make clean air a human right and are we willing to pay it? To answer these questions, we have to look at what constitutes a right and how that affects individuals, societies, and governments.

What air pollution is and how it affects individuals

According to the Swedish Environmental Protection Agency, “The air must be clean enough not to represent a risk to human health or to animals, plants or cultural assets.” There are current measurements that are in place to measure the air quality. For example, Air Quality Index (AQI) is an index for measuring the quality of air by calculating the ratio of the count of smaller particles (with a diameter of 2.5 micrometers or less) to the count of bigger particles (with a diameter of 10 micrometers or less). AQI between 0-50 is considered clean air.

The presence of toxic or excessive amounts of chemicals from the burning of fossil fuels by vehicles or factory emissions in the air is what makes the air polluted. An alarming 2.4 million pounds of carbon monoxide is released into the air every second. Global warming arises from this continuous release of greenhouse gasses. A lot of effects come with breathing polluted air everyday. Short term effects include eye, nose and throat irritation as well as upper respiratory infections, such as bronchitis and pneumonia. Long term effects, due to the continued presence of polluted air, are much worse and can cause more severe damages including lung cancer, heart disease and even affecting the liver, brain, and kidney. Children, whose brains are still growing, and the elderly, whose immune systems are weaker, are especially vulnerable.

This problem is becoming more and more significant because of the growing population. The population has grown from around 1 billion in 1800 to 7.616 billion in 2018. The growth of cities is substantial, and that results in the growth of vehicles and factories. Over 50% of the world’s population lives in urban areas. Because factories and industries are looking for the best way to save money, not the environment, they persist in harming the environment by continuously setting off harmful chemicals into the air. These industries are putting profit over public health, which may seem appealing in the short term, it can have disastrous consequences in the long run. The importance of good air quality is not just for us humans, but for all forms of life, with the quality of the air becoming worse and worse every single day. In order for everyone to be protected, binding legal standards need to be created.

According to the United Nations definition of human rights, “Human rights are rights inherent to all human beings, regardless of race, sex, nationality, ethnicity, language, religion, or any other status.” When a right becomes a human right, it becomes regarded as a right that is so fundamentally important that it requires special legal support and protection. It opens up a path to a good life for everyone, regardless of any status. As long as air quality is not a human right, it will not be put into place and enforced. Air quality as a human right is the only way to stop the pollution because human rights are untouchable and not influenced by political views or lack of knowledge of the government in power or changes in the policies as the governments change.

Air pollution is not just outside; it can affect people inside their home as well. By having good air quality as a human right, people can escape the pollution that seems to be everywhere they go. Of course, because everybody relies so much on the industries that create the products we use every day, such as cars and phones, it will be a significant effect if these large industries are forced into making their factories beneficial for the environment. However, the drawback is that the prices of these products may increase considerably. This will affect individuals dependent on their income and economic status. The companies production will be more expensive, and it can be hard for smaller companies to adapt to the change.

While it is favorable to make the quality of air better, it may negatively affect the smaller companies and the less privileged customers. This could mainly affect innovation since during the first stages of any design, lots of money goes into the design, and there are multiple testings and trials before the product is released into the market. Having air quality as a human right, the design process will have many more expensive requirements that will make it harder for innovators to take on in the early stages.

Also, people with lower incomes and status have much less power in stopping air pollution than more advantaged families. Poorer families live in poorer towns where the air can be worse. This can be due to several reasons. First, because the land is cheaper in poorer quality towns, making it a better choice for the factories to move there. Second, people with lower status are not as well heard, making defending themselves against huge companies much harder and improbable. Third, people’s choices are more limited, making the expensive eco-friendly options not viable for them. They unintentionally have to contribute to increasing the air pollution in their environment by going for cheaper and non-eco-friendly products because of their budget. All of these contributing points show how complicated this issue is.

Governments can issue limits on toxic air emissions from cars, homes, and factories which would consequently require certain standards to be met. The government has the power to ban production or consumption of certain products that would release dangerous chemicals and pollutants into the air. However, can the government ensure that clean air becomes a human right? While it seems improbable, it is about to happen in Europe. The European Court of Justice has ruled the right to clean air to be added to the European Union law.

As a result, many countries in the EU have now started the fight against air pollution through banning, for example, diesel and solid fuel burning. This ban started in the beginning of 2019. Currently, in the United States, we have the Clean Air Act which allows the U.S. Environmental Protection Agency to keep people’s health safe and protected from the damaging pollutants by regulating the emissions to the air through setting standards and limits on emissions. However, in the United States, it is still not a human right, though it can be done.

There are pros and cons in making clean air a human right, but the pros outweigh the cons. With good air quality being a human right there will be no air pollution-related deaths or diseases and the environment will get a chance to recover from all the harm we caused due to the direct and indirect effects of the pollutants. Individuals, societies and the governments all play a role in improving air quality and making clean air a right will ensure the best efforts are made at all levels and at all times without the risk of political or economic motives affecting it. There are costs to be paid, but in the long run, it is doable, and the best option and is already happening in Europe. However, we should not forget this issue as a global matter. The good quality of air in one country should not account for the bad quality of air in another by moving pollutant emitting factories to that country, for example. Because as a human right, it is every human’s right to have clean air no matter where they live or what their social status is.

Parmis is in middle school and she enjoys hands-on activities and designing new tools. 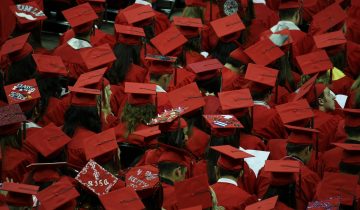 Into the Unknown: Unprecedented Challenges for 2020 Graduates