On Sunday, July 7, the U.S. women’s soccer team won yet another World Cup title. This 2019 win is the team’s second consecutive World Cup title and fourth in all. But this year, the team has not only made headlines for their exceptional playing skills but also for promoting LGBTQ rights and fighting against pay inequality issues in the industry. The female players have recently spoke out against traveling to the White House per the president’s request in support of gay rights and brought a lawsuit against the United States Soccer Federation for being paid a mere fraction of what male players are paid for doing the same job and producing the same, if not better, results. The team is doing more than just bringing these inequalities to light— they’re looking for justice.

Having a lesbian coach and a few lesbian players has made the U.S. women’s soccer team a symbol for LGBTQ inclusion. Therefore, it was no surprise when the team stood behind MVP Megan Rapinoe after she said she would not be visiting the White House if invited by President Donald Trump and encouraged her team to “think hard about lending that platform or having that co-opted by an administration that doesn’t feel the same way and doesn’t fight for the same things that [they] fight for.”

It’s not just drama involving the president that has inspired people everywhere to listen to what this team has to say. It’s their unapologetic stance on inclusivity and having the right to love whoever you want. It’s their unfiltered public expressions of gay love on and off the field that encourage their fans to embrace who they are. It’s their opinion that anyone, regardless of sexuality, race, or gender can win the World Cup.

Unequal pay due to gender is, unfortunately, not a new issue. But it is a bit surprising (and extremely concerning) that in the 21st century, women are still being paid less than men in many industries. Especially industries that are so public.

Despite having higher ratings and bringing in a greater amount of revenue than their fellow male soccer players, the female players on the U.S. women’s soccer team earn significantly less than the males. According to their lawsuit, if the women’s team wins 20 non-tournament games, they would earn $99,000. On the other hand, the men’s team would earn up to $263,000 for the same number of games won. In addition, the Women’s World Cup earnings totaled $30 million in prize money while the men received $400 million in their World Cup just last year. These differences are shocking, and it is startling how the United States Soccer Federation got away with underpaying these women for so long solely based on their gender. The female players were only making 37.5% of what the male players were making for doing the same exact job. The numbers don’t lie.

The lawsuit against the United States Soccer Federation for unequal pay due to gender discrimination will start another important conversation regarding this social injustice. This lawsuit isn’t just about soccer players. It’s about female teachers, police officers, doctors, and lawyers who are also underpaid in their fields because of their gender. It’s about all female workers who are discriminated against based on their gender and race. It’s about every single woman who loses a pay raise or a promotion to a man she works just as hard as. This conversation may start with the U.S. women’s soccer team, but it won’t stop there.

The ideal solution to the problem of pay inequality is for employers to stop factoring a worker’s gender into their paycheck. It doesn’t matter whether an employee is female or male. If they both get the job done, they both should earn the right to an equal paycheck. A person’s gender neither hinders nor aids them in their job! At this point, supporting the women’s soccer team in their fight for equality is one of the best chances females have had in a long time to possibly win equal pay but more importantly prove that they’re tired of being told they are worth less than males. This lawsuit is only the beginning for the fight for equal pay, so stay tuned.

Though the U.S. women’s soccer team’s lawsuit is still being mediated, it is my hope that this wrong will be righted as soon as possible. In this day and age, I don’t believe this situation will be easily smoothed over because it’s about more than money. It’s about equality. Despite the fact that our country is supposedly built on the premise of equality between citizens, things don’t always happen that way. It’s time to make a change. It’s time for equal pay for all regardless of gender or race.

[Image Attribute: Jamie Smed]
Disclaimer: The views and opinions expressed in this article are those of the author and/or student and do not necessarily reflect the official policy or position of United 4 Social Change Inc., its board members, or officers.
Tags:equal payus women's soccer

ICE's Action Of Raiding The Immigrants Is Absolutely Wrong

It's Time To Melt The ICE Raids 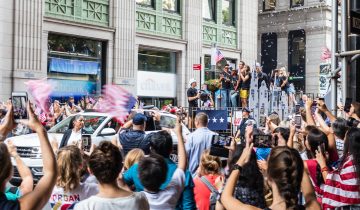