ICE Raids Are Not A Good Strategy

What Are ICE Raids?

ICE stands for Immigrant and Customs Enforcement. Recently, ICE has targeted over 2,000 illegal immigrants who have come to the United States. President Donald Trump was well aware of the raids, which were called Operation Border Resolve, days before its execution. The motive of these ICE raids is to send immigrants to jail, either here in the U.S., or back in their home country. ICE raids are a terrible way to handle these immigrants, and we need to come up with a better strategy, one that doesn’t cause people to live in fear.

If ICE doesn’t have a search warrant, they technically aren’t allowed to come into your house without your consent. However, they can still show up at your door and wait for you to come out of your house, which is their current strategy for these raids. Ice’s actions have caused many immigrants to hide inside as a result of pure fear. Consequently, many communities of immigrants have been working to help each other in these situations, by providing food, water, and other needs so that the families can stay safe inside. As reported by the New York Times, one community of immigrants living in an apartment complex in Houston, Texas, refused to answer the door. A woman who lived there, Kaylin Garcia, was the one who warned her neighbors of the ICE agents’ arrival by posting on Facebook. The agents left the undocumented families occupying apartments in her building alone, after waiting for a few minutes with no answer.

These ICE raids bear a disturbing likeness to the pass laws of apartheid in South Africa. These pass laws were a system created to regulate the movement of black people into white areas of the country, much like the system we have for immigrants in America. With these pass laws, all black South Africans older than sixteen were required to carry a “pass”, which was a small book of reference. If you did not carry your pass, it was not only a crime, but also made it nearly impossible to find work. During this time, roughly 17,745,000 black South Africans were arrested. For both the pass laws and the ICE raids, citizenship laws are being used to ensure control over nonwhite people. As a result, many nonwhite people are not given a chance for citizenship, and are deported out of the country, making it very hard for the immigrants to find a legal way in.

Once the person is arrested, they are taken to a local ICE office. It can take up to five hours to finish paperwork and find a detention center for the person to be kept in. If the detainee does end up going through deportation, the time the process takes depends on where they are coming from and where they are going. For people from countries in Central America, it can take three to four months. Most are sent back on flights chartered by ICE. Where they are staying is not a place anyone should be in for a long period of time. The detention facilities across the nation have terrible conditions, many being overcrowded. Some of the people in the detention facilities have to sleep on the cement ground. The ICE raids force these people into the terrible facilities, making ICE raids even worse of a solution.

Border control is a necessary regulation for this country; however, there are many better ways to handle it than ICE raids and detention centers. To start, ICE could focus on immigrants who actually have criminal backgrounds- not just any undocumented immigrant. If someone does get captured, the U.S. can work to make the process quicker, so the person won’t have to stay in the detention centers for long. Another action the U.S. can take to help regulate the arrival of immigrants is working with countries they are coming from to help make life at home better, so they don’t have to come to the U.S. just to be sent back. ICE raids are clearly unacceptable and inhumane, and the U.S. must work to find better solutions.

This OpEd was written by U4SC Student Intern, Mia.

[Image Attribute: Fibonacci Blue]
Disclaimer: The views and opinions expressed in this article are those of the author and/or student and do not necessarily reflect the official policy or position of United 4 Social Change Inc., its board members, or officers.

The Debate Over Asking "Are You a Citizen?" On The 2020 Census 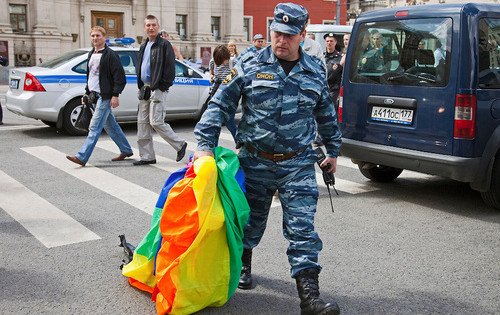 LGBT+ Rights in Russia after Sochi: Better or Worse?