Even in 2019, women face disparity in every aspect of their lives. From child marriage to the wage gap, women have to work harder than men to prove themselves and to be afforded the same opportunities. The UN reports some horrifying statistics:

These figures serve not only as a terrifying reminder of the atrocities committed against women, but as a call to action. Women deserve gender equality – economically, politically, and socially – for the work that they do. Gender-based violence continues to exist, and discrimination against women is prevalent all over the world. The estimated world average for gender equality stands at 108 years currently – 108 years too long. We need to take action now to ensure that the fight for gender equality is won in our lifetimes.

Gender equality remains an international problem, but particularly so in the United States, where the estimated time to achieve gender equality currently rests at 208 years, 100 more than the world average. According to Equality Can’t Wait, in the US, men are 70% more likely to be executives than women. Politically, women comprise less than 25% of Congress. The US has achieved educational gains, but they are yet to pay off; women earn more college degrees but are often channeled into less lucrative careers.

From a financial standpoint, women are not paid as much as men either. Forbes reports that Equal Pay Day fell on April 2nd, 2019. This date represents how far into 2019 white women had to work to earn what their white male counterparts made in 2018. But for black women, the gap is even wider. Black Women’s Pay Day was on August 22nd, 2019. What’s worse is that we are only moving backwards. In 2018, Black Women’s Pay Day was on August 7th; in 2017, it was on July 31st. For the over 70 percent of black women who are the primary providers of their households, this gap has a particularly deleterious impact. It’s simply not fair to pay women less than their male counterparts.

Women make up over half the world’s population and therefore over half of its potential. Women are our future leaders, inventors, philanthropists, authors, artists, and so much more. Unfortunately, inequality follows women from birth and stagnates social progress. Female participation is necessary to expand our labor force and promote economic growth.

However, there is still hope for the future. The UN also reports these much brighter facts:

Thus, we are truly making progress toward gender equality. The future is bright, and with each one of us that adds our voices to the mix, it shines brighter. It’s important for us to keep in mind the progress we’ve made and use that to fuel our future.

As outlined on Equality Can’t Wait, there are several steps you can take that will foster change and help us work toward seeing gender equality in our lifetimes. Most importantly, each and every one of us needs to start talking about it. A conversation can have unforeseen power, particularly among your close friends and family. Call people out on their sexist rhetoric, even if it’s as simple as a joke that isn’t funny. This is important because it sparks a conversation and a recognition of continuing bias.

Additionally, you can donate to organizations that are working to achieve gender equality, both in the US and overseas. Organizations such as Time’s Up, the National Women’s Law Center (NWLC), Equal Rights Advocates, and Equality Can’t Wait are working to achieve gender equality for women today. You can also volunteer with organizations near you or call your congressperson. It’s important for each of us to lend our time and voices to these issues so we can live in a much more equitable world within our lifetimes.

This OpEd was written by U4SC Student Intern, Nikhita.

[Image Attribute: ITU Pictures]
Disclaimer: The views and opinions expressed in this article are those of the author and/or student and do not necessarily reflect the official policy or position of United 4 Social Change Inc., its board members, or officers.
Tags:female leadershipgender equality 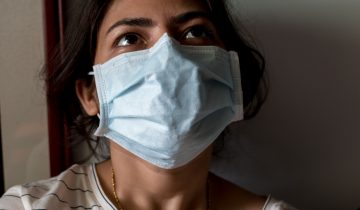 The Negative Mental Effects of COVID-19