Anti-obesity campaigns have become increasingly prevalent; although they seem to be well-meaning in their promotion of healthy lifestyles, their fear-mongering and inaccurate information do more harm than good. The war on obesity has resulted not in a happy, fit, and thin nation, but rather in an appearance-obsessed society with few health benefits to show for it. Fatphobia, or the fear or dislike of fat people, is an increasingly prevalent issue. In spite of the abundance of weight-loss tips and fad diets, these proposed solutions have failed to solve American health problems, instead creating a host of medical and psychological problems. The negative impact of social and medical stigma against fat people likely outweighs the inherent negative health impact of being overweight.

Misleading information is at the roots of the belief that being above a “normal” weight is inherently unhealthy. Despite the fact that the American Medical Association has classified obesity as a disease, there was no consensus at the time that it fit the qualifications of a true illness. In 2013, the AMA’s Committee on Science and Public Health described its reasons why obesity should not be classified as a disease. It has no harmful symptoms on its own, and (except in extreme situations) has not been proven to increase mortality risk. In fact, compared to normal weight, Grade 1 obesity is not associated with increased mortality, and being overweight is associated with significantly lower mortality. Furthermore, obese people with type 2 diabetes, hypertension, cardiovascular disease, chronic kidney disease, a history of heart attacks, or several other conditions generally live longer than non-obese people with the same conditions.

Despite these findings, the AMA overwhelmingly voted to declare obesity a disease. Financial conflicts of interest may have influenced this decision. Obesity researchers frequently receive generous amounts of funding from pharmaceutical companies, medical-device manufacturers, bariatric-surgery practices, and/or weight-loss programs. Consequently, due to the inadequate reasoning behind declaring obesity a disease, this decision has led to flawed methods of treatment and care.

Additionally, Body Mass Index – which medical professionals use to classify obesity – is not a particularly accurate or useful tool. It is measured only by comparing a patient’s height and weight – not taking into account factors like body composition. It was originally created to provide statistics about a general population, not to assess individuals, and only weakly predicts risk for diseases. Finally, although obesity is correlated with increased risk for a number of diseases, there is little evidence that it directly causes those diseases. Factors like income, stress, and physical activity often more accurately predict morbidity. Plus, weight cycling accounts for a substantial amount of health risk, especially in regards to hypertension, and may be more harmful than excess fat itself.

Fatphobia, caused by misconceptions held by both medical professionals and the public, destroys the health of those it affects.

This misinformation has had adverse consequences for many people. Obese people commonly face discrimination in employment and are perceived as less qualified. They tend to receive fewer promotions and lower pay. Gender plays a role in this prejudice: women are three times more likely to report obesity discrimination than men.

Moreover, fat people are more prone to being bullied as children. Even as adults, they face greater levels of social exclusion. This intolerance has very real effects – weight stigma is both physically and psychologically damaging. Adults who experience weight discrimination have up to a 60% increased risk of death, independent of BMI. They are also 2.5 times as likely to experience mood and anxiety disorders. People who perceive themselves as overweight, regardless of their actual BMI, often are less healthy, based on biological markers such as blood pressure and cholesterol. Thus, fatphobia is a significant health issue.

To diminish the cultural stigma surrounding body fat, several steps must be taken. First, the majority of anti-obesity public service announcements and broadcasts carry some level of weight stigma. These campaigns must be reviewed prior to publishing to ensure they do not encourage bigotry or negative attitudes towards fat people. Likewise, public service announcements opposing weight stigma would be useful in altering societal perceptions.

In the United States, anti-discrimination laws protect a variety of groups, including race, sex, and religion, from discrimination in housing, healthcare, and employment. By including weight as a protected class under this legislation, governments could prevent injustice and thus improve the health and well-being of those who had previously suffered from weight stigma.

Besides being prevalent throughout American society, weight stigma is especially pervasive among medical providers. Physicians display high levels of anti-fat bias, which has powerful effects on their ability to treat patients fairly and accurately. Too often, doctors prioritize suggesting weight loss above educating patients about heart disease risk factors, even though weight does not predict risk of heart disease. They may even ignore serious medical conditions, causing serious health issues. This causes many patients to avoid doctor’s appointments and preventative care, or put off treatment until their health condition is too much to handle.

These well-meaning recommendations to “just lose weight!” are not just dismissive but possibly actively harmful. Weight cycling is notoriously detrimental to health; it directly causes inflammation and is also associated with hypertension, insulin resistance, and increased morbidity. Even when dieters maintain weight loss, it can pose considerable risks to obese people. Although participants in weight-loss programs frequently show an initial health benefit, this is more likely caused by behavioral changes, not by decreased weight. Also, dieting often serves as a gateway into more restrictive eating patterns and sometimes eating disorders. Extreme dieting should not be encouraged, as it is both physically and psychologically unsafe; however, many weight-loss programs promote overly restrictive dieting patterns.

Weight discrimination in the medical field is medically dangerous, and efforts must be made to end this prejudice.

To reduce intolerance in medicine and provide proper healthcare regardless of size, medical providers must engage in systems that will push them to confront their own biases and better understand healthy alternatives to weight loss. Medical training should include weight bias training and education regarding the misconceptions surrounding BMI and health. Doctors who display empathy rather than dismissiveness will more successfully communicate with their patients in order to provide them with adequate healthcare.

A movement called Health At Every Size provides an alternative to typical current obesity treatments. It advocates for respect, critical awareness, compassionate self-care, body acceptance, and intuitive eating. Their methods have greater success than conventional treatments. By widely incorporating these values, healthcare providers can improve the fitness of all their patients and reduce medical discrimination.

Fatphobia, present throughout society and medical systems, is detrimental to the physical and psychological wellness of many people. It is deeply rooted in the culture and institutions of the United States, but it is essential that we oppose this social and medical prejudice in favor of compassion and acceptance.

Disclaimer: The views and opinions expressed in this article are those of the author and/or student and do not necessarily reflect the official policy or position of United 4 Social Change Inc., its board members, or officers.
Tags:acceptanceFatphobiahealthobesity 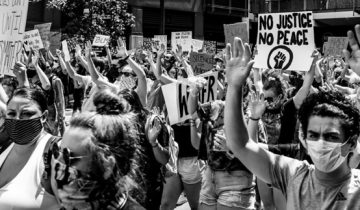