Pride Month Will Be Different In 2020 – And That’s Okay

Due to the combined impact of COVID-19 social distancing guidelines and unrest over recent police brutality, 2020 Pride Month celebrations will be different than those in recent years. Parades and large gatherings are not feasible, and many feel that this is not a time for celebration. Although this is understandably disappointing to many, it is important for the LGBTQ+ community to accept these alterations and make Pride Month 2020 a month for advocacy and change.

On June 28, 1969, police conflicted with patrons of a gay bar in an event we now know as the Stonewall Riots. The police ran a raid on the Stonewall Inn in New York City based on liquor-license charges. As customers and patrons were shoved roughly into police vehicles, a large crowd began to gather. Previous witnesses of police violence against LGBTQ+ individuals had typically stood and watched passively, but this time was different. Onlookers yelled and threw debris at the police, causing the officers to barricade themselves inside of the inn. Some participants, such as Martha P. Johnson, Miss Major, and Storme DeLarverie, are remembered as heroes for their role in this event. Notably, all three of these women were/are Black. Black people have been on the front lines of the gay liberation movement since its inception.

Previously, the gay rights movement had taken the form of peaceful protests and advocacy through civil and legal means. However, this powerful demonstration propelled LGBTQ+ activism in a new direction. The next year, a gay pride march was organized on the anniversary of the riots. Over time, this annual event advocated from a one-day march into a month-long celebration, now known as LGBTQ+ Pride Month.

For many Americans, Stonewall is the first thing they think of when recalling elements of LGBTQ+ history – and for good reason, as it set the stage for decades of campaigning. Although recent Pride Month celebrations have been cheerful and bright, with parades, parties, and rainbows everywhere, fighting against police brutality is more true to the original spirit of pride. Joy and pride in one’s identity are of course important, but it is not uncharacteristic or ahistorical to stage protests instead of parades.

Historical Links Between Queerphobia and Racism

Police brutality is clearly a queer issue, but racism is a queer issue as well. Many societies throughout history have acknowledged a significant range of sexual orientations and gender identities beyond the strict cisheteronormativity the Western world has barely begun to break out of. From Native American nations to Hindu society, people outside the gender binary have historically been acknowledged and even celebrated. In the process of colonizing much of the world, European nations erased and oppressed queer people, which still has a huge impact on our world today. To uphold strict gender norms and deny the identities of others is to perpetuate white supremacist ideals by assuming that the worldview created by European colonists is universally correct.

Intersectionality Between Race, Sexuality, and Gender

The oppression and silencing of queer people of color is not a thing of the past. Today, LGBTQ+ people and people of color (POC) still face significant obstacles. Those who exist in the intersection between those two groups are particularly impacted. For example, fatal violence disproportionately targets Black transgender women. Discrimination against Black trans people is rampant: 48% of Black trans people were denied a job due to their transgender identity or gender-nonconformity, and 21% have been refused medical treatment due to bias. Additionally, queer people of color may struggle to find a truly welcoming space in either group. In the United States, homophobia is prevalent among people of color: 61% of Latinxs, 53% of Asian Americans, 43% of African Americans, and 27% of whites believe there is “‘a lot’ of discrimination against lesbians and gays in their racial community”. However, LGBTQ+ people are not fully free from prejudice either: 61% of LGBTQ+ POC have experienced racism from within the LGBTQ+ community. Thus, queer POC may be turned away by both groups, making it difficult for them to find affirmation of both aspects of their identity. Until the LGBTQ+ community is able to confront its pervasive racism, it will not have fulfilled its goal in promoting acceptance and equality for all. One who supports the queer community but refuses to fight for the rights of people of color has betrayed a significant group of LGBTQ+ people – a group that this community would not be the same without.

Additionally, many Black LGBTQ+ people are significant advocates for the queer community. Organizations such as GLAAD (formerly the Gay and Lesbian Alliance Against Defamation) and the Transgender Law Center are led and supported by Black board members. Many Black authors have written about LGBTQ+ issues and experiences, while Black film directors, actors, musicians, and other artists have also expressed these stories through their work. On a local level, there are people leading the way to help people discover what it means to be Black and LGBTQ+ in their community. Thus, these Black queer leaders are making progress for all queer people, so the rest of the LGBTQ+ community must give back to them by advocating for their rights.

As a queer person who is ready to get involved with the Black Lives Matter movement, what can you do to help? The first step is to educate yourself on what this movement is about: find resources from your local protest organizer. Follow advocates on social media. Read books about anti-racism. After that, there are several ways you can take action: use your voice to speak out and share resources on social media. Approach your family and friends in order to have discussions about race and policing in the United States. Sign petitions. Call or email your representatives – especially in local government, because that is where your voice is most likely to be heard and make an impact. Donate to bail funds or other organizations if you can.

If you are able and willing to go to a protest, find one in your area and ensure that you know all of the guidelines set by the person organizing it. If you’re non-Black, put your body on the line and protect Black people from harm by police officers. If you share pictures publicly, be sure to blur out people’s faces in order to avoid putting them at risk. Follow safety tips: bring essential supplies, such as water and a basic first aid kit. Write down emergency contact information. Don’t wear contact lenses, as those can trap chemicals such as tear gas. Wear a mask and follow social distancing guidelines, if possible. Know your rights and understand how to properly invoke them.

Furthermore, there are ways you can get involved with a protest without being part of the rally itself. For example, providing food, water, and medical assistance to protestors are often welcome and necessary. Asking friends and family members to attend is important, even if you personally are not able to march at the event. Afterwards, many areas will have community clean-ups to take care of the aftermath of the protest once the crowd has cleared.

Finally, remember that this movement is not going to be quick, so you should be prepared to continue fighting for Black rights and uplifting Black voices (especially Black queer voices, which are most often overlooked) even after the initial outrage settles. People have been harmed by police brutality for decades, so it is essential that this momentum continues.

Disclaimer: The views and opinions expressed in this article are those of the author and/or student and do not necessarily reflect the official policy or position of United 4 Social Change Inc., its board members, or officers.
Tags:BLMgay rightsPride

Invest In Future Leaders By Investing In Ethnic Studies 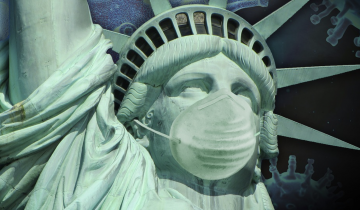