Concurrent with the Black Lives Matter movement comes concerns over the militarization of police forces in communities across the nation, an issue that is no doubt one of immediate remediation. A solution that has caught both mass popularity and criticism is defunding the police, and while some associate it with the radical notion of abolishing law enforcement agencies, it is far from the idea. Rather, defunding calls for the divestment of U.S. police department’s budgets, a staggering $115 billion nationwide, and allocating those funds to community institutions, from health care to education, that strengthen social welfare.

The activism campaign, Black Lives Matter, spread across the nation in light of acts of police brutality against African Americans, seeking justice for afflicted individuals. Directly speaking out against systemic racism in law enforcement agencies and government institutions, the movement similarly initiated an opportunity for reform, popularizing the idea of defunding the police.

Radical in the sense that traditional societal structures would be transformed, routing government spending to prioritize social services that directly deal with social issues such as homelessness, domestic abuse, and mental health disabilities has become relatively ideal. The notion calls for rectifying welfare systems that mitigate crime instead of intensifying police presence within communities.

Local municipalities typically fund police departments within their cities, though it may extend to counties and regions. Because local governments are in control of the majority of police budgeting, each city allocates funds based on the fiscal and social demands that its population requires. While K-12 education and public welfare systems most often receive the largest cuts of city budgets, police funding still passes housing, community development, and other services that directly deal with infrastructure.

Of course, these financial diversifications mainly depend on taxes from the residents, whether it be property taxes or et cetera. Simply put, the amount of development and infrastructure invested into a community is funded by the citizens themselves, and though federal and state welfare programs provide some relief, community institutions can be deeply underfunded in neighborhoods that are historically impoverished.

Working Against the People

The question still remains: if the police are defunded, isn’t there going to be more crime? This may be true in some cases, but policing is a multi-faceted topic that must be further explained with the purpose of the police itself. The police institution was built upon pre-existing racial sentiment against people of color, specifically African-Americans, that correlated problematic minorities with higher rates of crime, hence the disciplinary action to “over-police” certain neighborhoods.

Today, over-policing plagues people of color disproportionately in comparison to affluent communities, which could lead to justification as to why African Americans are incarcerated at a rate five times greater than whites despite committing similar offenses. Policies supporting the war on drugs and other anti-crime campaigns similarly exacerbate this issue with racially biased mass incarceration and heavily armed law enforcement officers.

Oppression of People of Color

There is no one-sided view to the oppression of people of color due to how diversely oppression can apply to different populations, but there are several major factors that can be presumed to be the cause of such. Redlining, practiced during the New Deal, denied economic services to minority neighborhoods that were marked “red” to be areas of supposed risk to governmental and banking institutions, reducing investment in those communities in terms of housing development. This would, in turn, produce suburban subdivisions for whites who thrived off of economic prosperity of other New Deal programs, which similarly disadvantaged African Americans.

Likewise, gentrification remains to this day, essentially increasing the cost of living in minority neighborhoods to conform to middle-class sprawl and displacing the ethnic community. With this, a clear divide is drawn, and alongside it comes biases of certain groups. Because such is assumed about these “troublesome” areas, authorities often spend more resources in those regions to suppress felonies that are only predicted to happen in relation to the community’s predominant race.

Advocates pressing for this reform are often those motivated by the Black Lives Matter movement, believing in justice for those wrongfully killed by police, such as George Floyd and Breonna Taylor, through unlawful methods. Others suggest a more conservative approach; rather than defund the police, reallocate funds to training and education in addition to the usual six-month training period.

Whatever the solution may be, the ramifications of such must be considered, taking into perspective whether police reform is a viable option in this current climate. Legislation is becoming more progressive, with the enactment of “Breonna’s Law” in Louisville and other similar policies, yet there leaves much to be resolved.

In proportion to their relative value in the community, local police departments tend to be over-funded, even taking up a majority of budgets in some municipalities. As proposed, investing in social services is considered the most effective option, providing citizens with government-provided services and need-based welfare in accordance to how prolific their budget is. In addition, legal constraints must be added to force officers to take accountability for constitutional violations.

An example: health care workers could become better equipped with proper training and medical equipment to professionally handle not only physical injuries but mental health crises, and schools could offer their students significantly more educational opportunities and resources to bring about upward economic mobility in low-income areas.

Though optimistic, these solutions are only the start of a society for the people. What is to be the norm of a developed country is insufficient in some regions of our nation, and it must be addressed immediately. By the people, for the people.

Disclaimer: The views and opinions expressed in this article are those of the author and/or student and do not necessarily reflect the official policy or position of United 4 Social Change Inc., its board members, or officers.
Tags:BLMcommunitydefund police

Foreign Aid Has Become Too Foreign For Nicaragua

Breonna Taylor Deserves Better - So Do Hundreds of Black Women

Jake Chang is a rising junior at Oxford Academy in Southern California. Subjects of interest include activism and literary education. 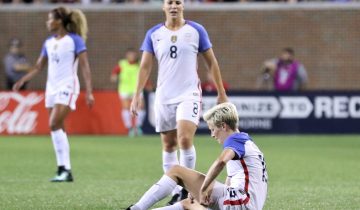