In case you missed it: Trump issued yet another executive order. This time, on June 16th, 2020. In an effort to curb the ongoing protests, he signed into mandate a ‘police reform’ order. Except, if you bother reading the drawn-out eight pages, it does not say anything substantive. Contrary to what some may argue, this mandate will fall short in appeasing the masses and reforming the police system because it does not enforce any of the suggestions listed therewithin. The only thing this executive order does well is ensure he does not lose his central base—not condemn the behavior we have seen, recognize the harm the police system causes, or provide remotely sufficient reforms.

As trivial as an admission on Trump’s administration’s behalf—that the police institution has to be reviewed—may be, we have indeed lived to see the day. Except, barely so. Most individuals and leaders would, at the very least, performatively reconsider their ‘political’ stances if faced with continued global protests. It only took him three weeks to succumb to the growing pressure from citizens, united across all fifty states (and some nations abroad) demanding an end to police brutality.

The deaths of George Floyd, Breonna Taylor, and Ahmaud Arbery back to back were the final straw for all of us who believe Black lives matter. As contrary as such a police reform mandate may seem from his typical stances, this was a political stunt that we cannot be fooled by. It was his poor attempt at silencing the masses, and nothing more. The brief, a waste of 8 pieces of paper, says nothing that merits praise or attention. So much so, that a month later, many did not know of this executive order.

Fell Short on the Condemnation

Taking the time to read the first page of the document, it becomes clear he is by no means compromising his actual political beliefs. He says, of police officers and the system in place, that there are only some instances in which individuals have deviated from the central goals. Furthermore, the brief states that the administration recognizes law enforcement to be a necessary and protective service for the general public. These words, like most of his public statements, convey carelessness and border on hateful with the amount of ignorance they carry. Neither he, nor those rationally capable of analyzing the repercussion of actions, can argue that he is foregoing the protection of our partnerships abroad to invest in American interests. He has driven us further apart and continued to stifle the passing of protections for our most vulnerable demographics—and this brief serves as proof.

A Long History, and a Longer Future

For someone so quick to condemn other people in positions of power, it is borderline surprising he did not alter his position this time around. However, he is very conscious of the supporters that make up his base. It is not in his best interest to veer far from that and risk losing voters. Being a firm believer in the need for law enforcement—to lock up and propagate suffering for minority communities, quite frankly—has long been his position. Consider the Central Park Five. Which is all to say, do not fall victim to persuasion that he has remotely changed.

The executive order’s most progressive policy move involves social workers being asked to step in for police officers when calls come in about homelessness are brought to their attention. It is the only place, however, where he tries to curtail police intervention—and still falls short. He leaves it to local authorities to follow through with the enactment. Similarly, there is a proposal to start a national database for police officers who have abused power; it is left up to the department to file these instances, however. And as if all of this were not discouraging enough, chokeholds were not banned.

The Vague Promises Will Fall Short

As if it were not already discouraging enough to hear that Trump has not done anything beyond ‘encouraging’ such minimal changes, there’s more! He neither provides a direct incentive to have these changes implemented, nor any punishment for those that fail to implement measures meant to curtail police brutality. There is no withholding funds, or any intimidating glares that will be sent the way of departments not being proactive. With no pressure from the federal government to do right by the citizens the system is meant to serve, it is unlikely we will see any magnificent transformations anytime soon.

This clarification, the asterisk at the end of the brief’s proclamations if you will, proves that this order is nothing more than a political stunt. Trump holds the power to create reforms, but is choosing not to do so. Let it be clear that he has chosen his position, and does not deserve the benefit of the doubt. No president is free from the onus of protecting their citizens. Any president cannot protect the lives of their citizens, beyond ‘encouraging’ proper training—the absolute minimum that should be required of all police officers allowed to carry deadly weapons—does not respect the benefit of the doubt.

We will continue to see no change being enacted as a result of his order. Citizens are being pushed to resort to protests, which everyone can recognize the dangers of. This leads to the need (in his view) to add more police to the streets, and the cycle will continue to spiral.

The Move He Should Have Made

Perhaps, had he contemplated executing a plan half as solid as that of the House Democrats, some real change would have come to fruition by now. I would dare go as far as to say that his supporters would have gotten upset, but never considered any of his less radical presidential opponents. They would have moved on, and he may have even swayed some centrists. And while that reality comes with its own set of repercussions (and nightmares), it’s one that would have saved lives, and provided some sense of justice for the families of already-fallen victims. Reforms and defunding would provide multiple benefits, but it is not one that benefits him, so he continues to endanger minorities’ lives.

Disclaimer: The views and opinions expressed in this article are those of the author and/or student and do not necessarily reflect the official policy or position of United 4 Social Change Inc., its board members, or officers.
Tags:executive orderpolice reformpolicing

Melissa is a rising sophomore at Williams College double majoring in political economy and sociology. On campus, she spends her time doing advocacy work and mentoring students through an educational equity program. When she isn't playing with her puppy or keeping up with her French studies, she loves to knit and longboard. 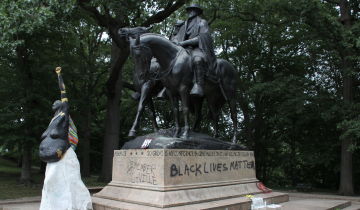 Be Careful With the Monuments