Political divide has been present from the beginning. Immediately after the birth of America, Alexander Hamilton and Thomas Jefferson started engaging in countless disputes. The two secretaries conflicted in a range of topics—some of which the Broadway musical Hamilton portrays—which eventually cleaved the governing men by their political views. The friction between Hamilton and Jefferson embodies the seemingly inherent conflict that dwells in the heart of American politics. Democrats and Republicans drift increasingly further apart as the two parties become more resistant to one another. Although politics has served as a critical foundation for government operation, partisan divide has created threats to government functionality and obstructions to the truth. Thus, it is necessary for America to have greater political unification to protect the integrity of the truth, the government, and its people.

The Development of American Politics

In his farewell address, George Washington presented a stark warning. He cautioned America about the “domination of one faction over another, sharpened by the spirit of revenge natural to the party.” Washington stood against the notion of factionalism and division among the American people. He also discussed how hyperpartisanship could lead to “foreign influence and corruption,” with “the policy and the will of one country [being] subjected to the policy and will of another.” As he saw it, partisan divide would produce negative outcomes and destabilize the nation. As Democrats and Republicans chafe against one another in the present day, it is natural to think that Washington would have disapproved.

A few decades later, James Monroe, America’s fifth president, aligning with Washington’s beliefs, declared that America would “prosper without the existence of parties.” Monroe was tied to what became known as the Era of Good Feelings. The “good feelings” were defined by American unity and cohesiveness, stemming from the near lack of political friction. National harmony and muted political rivalry formed an auspicious future. Monroe came close to achieving his ideal of nonpartisanship. However, soon after his presidency, the good feelings descended into bad feelings. Political opposition quickly emerged, as if disagreement were an intrinsic part of the political American. Soon, the unity diverged into factions, eventually branching into the two current political rivals: The Democratic and Republican Parties. The modern-day rivalry that looms over American residents’ lives casts an endless shower of bad feelings on Americans and the government.

Negative partisanship has played a substantial part in sharpening America’s trademark partisan divide. Negative partisanship operates on the idea that people form political views with the sole intent of opposing another party. This concept is a central explanation for much of the conflicts between Democrats and Republicans. Democrats and Republicans take views against the other party for the sake of opposition.

Negative partisanship is portrayed well in the realm of the media. A CNN article claimed that Fox News—CNN’s conservative rival—is “more anti-Democrat than pro-Trump.” Fox News hawks constantly attack Democrats, finding flaws wherever possible. For instance, immediately after Kamala Harris was announced to run with Joe Biden in the 2020 presidential race, Fox News launched verbal attacks on her. Similarly, CNN, the more liberal media outlet, also displays negative partisanship by constantly centering criticism and ridicule around President Trump and Fox News. Conservative media do not stop condemning Joe Biden’s deficits while they overlook President Trump’s blatant flaws, and liberal media constantly denounce President Trump’s incompetence while shifting away from Joe Biden’s imperfections. Another prime example, President Trump bases much of his political strategy on negative partisanship by attacking his opponents. President Trump is skilled in harshly criticizing his opposition. In 2020, President Trump prefers to convince people why not to vote Joe Biden rather than why to vote for Trump.

COVID-19 never seems to stop. With about 5 million confirmed cases and 160,000 deaths alone in the United States as of August 10, 2020, Americans anxiously await a vaccine, and they also await aid to help persevere through such tough times.

Congress has been a dysfunctional mess since the beginning of America’s COVID-19 fiasco. Providing necessary aid in areas such as unemployment and schools has proven difficult with stalemates and disagreements among lawmakers. The reason for these stalemates is the divide between Republicans and Democrats. As Congress’s unemployment benefits, established in March, expired at the end of July, Republicans and Democrats predictably disagreed about what amount to continue providing the unemployed: Republicans demanded giving $400 per week compared to the previous $600 while Democrats claimed that $400 was insufficient. Congress’s standstill in providing aid put millions of people at risk. People who were pressured to support their families and pay off rent needed money to account for unemployment, and the political divide in Congress served as an obstruction to that necessitated money. In addition, as anxiety about the coming school year, the gaping crevice in Congress’s functionality has widened. Democrats and Republicans agree that they must give aid, but the divide between them eradicates hope for finding common ground. The political conflict is causing destruction. Teachers and students are simply “collateral damage in the protracted stalemate,” a New York Times article stated. The quicker aid is provided, the less pain will be endured. The political divide of America once again hinders the progress that is so urgently needed. Therefore, Republicans and Democrats must look beyond their disputes and prioritize what is truly important: helping Americans

Politicization, as defined by a New York Times article, is the distortion of truth by rendering something political. The same article evidently did not see politicization positively, calling it “the last refuge of the scoundrel.” As America becomes more divided, politics intervenes in areas that it is not meant to act in.

A field whose primary purpose is to discover the truth about the world and universe ought to preserve the truth. However, science manages to get consistently wrangled by the disorder of politics. Politics is no stranger to bending science and truth. Climate change is one example. Science demands that the public understand the urgency of climate change. The numbers regarding rising sea levels, hurricanes, forest fires, carbon dioxide emissions, and more show that climate change is real and needs to be alleviated. Nonetheless, the issue of climate change has divided between Democrats and Republicans. A Pew poll showed that 72% of Democrats care a great deal about climate change compared to a mere 24% of Republicans. According to Anthony Leiserowitz, the director of the Yale Project on Climate Change Communication, climate change denial serves as a “litmus test” for identifying conservatives. Such a disparity between Democrats and Republicans in the realm of climate change is alarming. There ought to be a consensus considering how research has thoroughly established a causal relationship between humans and climate change. Conservative media like “Fox News [are] helping to destroy the planet” by downplaying the fact that the Earth is dying. Also, President Trump claimed that climate change “was created by and for the Chinese to make U.S. manufacturing non-competitive.”

In the COVID-19 era, truth is of utmost importance. Public health has been politicized, and a defining line has been drawn between Democrats and Republicans in their reactions to the pandemic. The importance of wearing masks has been repeatedly stressed by medical experts. However, the topic of masks has unsurprisingly been dropped into the political battlefield. While Democrats argue for the mandate of masks, Republicans charge against masks, citing an oppressive nanny state. A Pew poll from June 2020 found that 52% of Republicans support masks compared to 86% of Democrats. Because Republicans and Democrats constantly act in opposition, the more demanding Democrats are for masks, the more opposed Republicans are against masks.  If America had not descended into such a politically divisive nation, people would be more likely to follow the truth of science. This would spawn more mask-wearing and would thereby save more lives.

Politics is important. It is what holds governments together to create stability and functionality. Having multiple parties in a government is also imperative since a single dominant party could easily lead to an oppressive totalitarian state if there were not more than one party. Many would argue that American bipartisanship offers a unique diversity—one that checks and balances political views to stabilize the nation. This means that if one party gets out of hand, another opposing party can restrain it and return the nation to equilibrium. However, this political diversity has polarized into two dominating factions that resist cooperation. Bipartisanship to a certain extent is beneficial, but in the current climate when Republicans and Democrats’ stalemates are inducing dysfunctionality and resentment, it must be agreed upon that the blues and reds must join forces. The gap between the two must be drawn closer so that America can function efficiently. Cooperation is the key to progress, and this is an idea that George Washington and James Monroe likely had in mind. People can have differing views, but we cannot stand to have these differences branch into disparate poles, as they do now. To solve this issue of excessive partisanship, Republicans and Democrats should acknowledge their differences instead of attack each other’s views. We should find willingly find common ground that will benefit both parties. We should recognize when we exhibit flaws or when a key figure in a party makes mistakes. The political factions will not disappear in the near future, but if opposing parties work together, America can still act as a united nation.

America has shown that politics can easily go against its primary purpose of maintaining stability by harming residents, objectivity, and truth. COVID-19 has only exposed this defective centerpiece of American government. But as we fix the damage from COVID-19, we may be able to fix the wreckage partisan divide has caused.

Disclaimer: The views and opinions expressed in this article are those of the author and/or student and do not necessarily reflect the official policy or position of United 4 Social Change Inc., its board members, or officers.
Tags:american politicshostilityPartisanpoliticization 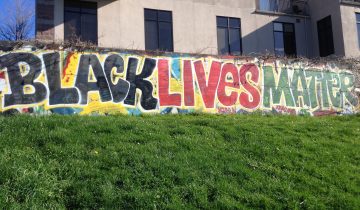