The First Amendment to the U.S. Constitution protects the right to conduct a peaceful assembly. Law enforcement may break up gatherings that have turned violent or present a danger to the public. However, recently, it has become glaringly apparent with recent events that the law enforcement response to assemblies widely varies. Though some may argue that elected officials and law enforcement were unaware of the size and scale of the planned breach of the U.S. Capitol, the recent riots highlighted the differences between the police response of the unarmed Black Lives Matter demonstrators protesting racial disparities and the pro-Trump rioters who stormed a federal building.

The Black Lives Matter protests in 2020 were met with an overwhelming response from law enforcement in several cities across the country.

In Minneapolis, the protests to condemn the police violence against George Floyd at the end of May were largely peaceful. However, at one point on May 26th, some protesters started throwing rocks and vandalizing police cars. Police officers, many of whom were fully equipped with weapons, used tear gas and flash grenades to break this protest up. Andy Maddix, a Star-Tribune journalist who was on the scene of the protest, reported that he was shot by a rubber bullet.

At Lafayette Square just outside of the White House in June, law enforcement aggressively cleared protesters out of the way so President Trump could make his way through the crowd and pose for a picture with a bible in front of the St. John’s Church. Protesters have testified about how the police used tear gas and batons to forcibly remove the demonstrators. Amelia Brace, an Australian journalist who was on the scene, testified that she and her cameraman were faced with projectiles and chemical irritants despite the fact that they were shouting that they were the news crew.

Overall, in response to the Black Lives Matter protests nationwide, chemicals, rubber bullets, and physical violence were used on crowds that were largely peaceful and some unruly protesters. There were more than 14,000 arrests made at these protests.

When the U.S. Capitol was stormed on January 6th, rioters carrying Confederate flags and fully dressed in tactical gear were met with light resistance.

Law enforcement was completely unprepared for the violence. Prior to the attack, D.C. Mayor Muriel Bowser announced that the Metropolitan Police Department would lead and coordinate with other law enforcement agencies during the protests. In addition, a mere 340 D.C. National Guard troops were requested to help with traffic flow.

By the end of the riot, there were only a few dozen arrests. Weapons and explosives were taken from members, and many were escorted from the premises by law enforcement, with or without handcuffs.

Despite the fact that there were several reports from high-ranking law enforcement officials that they had no intelligence about the violence that would ensue at the Capitol, it has now been revealed that the FBI and NYPD did in fact inform the Capitol police about the possibility of violence. The FBI visited more than a dozen extremists currently under investigation to urge them not to travel to D.C. Extremists had announced their plans to storm the Capitol on social media and now there are questions about why this information was not taken seriously enough.

If this is not evidence enough that the lack of law enforcement was purposeful, the lack of policing during the attack on Capitol Hill was not a one-off. For example, last May, a large group of armed white men stormed the Michigan Statehouse building in Lansing in response to the governor’s Covid-19 shutdown mandates was met with few arrests and little response from the White House.

The Black Lives Matter Global Network Foundation said it perfectly in their statement on the insurrection at the Capitol.

“When Black people protest for our lives, we are all too often met by National Guard troops or police equipped with assault rifles, shields, tear gas and battle helmets. When white people attempt a coup, they are met by an underwhelming number of law enforcement personnel who act powerless to intervene, going so far as to pose for selfies with terrorists… Make no mistake, if the protesters were Black, we would have been tear gassed, battered, and perhaps shot.”

The difference in the treatment of protesters based on race needs to end. Violent protests, no matter who is protesting, should be met with more force in order to minimize danger to the public. Peaceful protests should be met peacefully. It is our right. 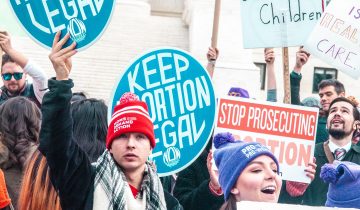