Ray Jasper, a death row inmate, did not commit murder.  The person who did commit the murder was not sentenced to death.  Jasper describes this seeming injustice in a recent letter to Gawker “Under the Texas law of parties, they say it doesn’t matter whether I killed the victim or not, I’m criminally responsible for someone else’s conduct. But I was the only one given the death penalty.”  This statute allows for those who did not commit murder but participated in a crime that resulted in homicide to be sentenced to the death penalty as if they committed the murder themselves, a guilt by association of sorts.

Ruled completely unconstitutional and in violation of the 8th and 14th amendments in Enmund v. Florida (1982), the law of parties was ruled admissible only in one situation according to Tison v. Arizona (1987)—where the accused showed a “reckless disregard for human life implicit in knowingly engaging in criminal activities known to carry a grave risk of death.” William J. Brennan penned the dissent in the case along with Thurgood Marshall, Harry Blackmun, and John P. Stevens, disagreeing on the equation of “intent to kill” by the participants with acting in a crime that has a “forseeability of harm” by the majority,  concluding in their dissent that “death penalty is in all circumstances cruel and unusual punishment prohibited by the Eighth and Fourteenth Amendments.”  In his conclusion, Brennan stated that one of the main reasons that the death penalty constitutes cruel and unusual punishment is the concept of arbitrariness.

Arbitrariness in this context refers to the unfair application of the death penalty, where uncontrollable factors such as race and location can control the outcome of sentencing.  The application of a just punishment should not be dependent on a person’s location either in a state or even in a county, nor should the color of a person’s skin have any factor in whether they are sentenced to death.  Ray Jasper, an African-American man, mentioned race in his impassioned letter, saying, “Everyone is not on a level playing field. For some, the odds are really stacked against them. I’m not saying they can’t be overcome, but it’s not likely. ”  Numerous studies have shown that both the race of the victim and the race of the defendant affects the outcome of sentencing.  Even though only 50% of murder victims are white, 79% of victims are white in death penalty cases. A study conducted in Philadelphia showed that black defendants received the death sentence at a 38% higher rate compared to all other defendants for similar crimes. This displays a bias in sentencing, an even further demonstration of the unjust nature of the death penalty.

Ray Jasper also mentions the geographical aspects of the death penalty in in his  letter, “I don’t agree with the death penalty. It’s a very Southern practice from that old lynching mentality. Almost all executions take place in the South with a few exceptions here and there. Texas is the leading State by far.”  As shown in the map, Texas strongly outweighs the number of executions in any other state. At 496 from 1977-2013, Texas has more executions than Virginia, Oklahoma, Florida, Georgia, Alabama, Missouri, and Ohio combined.  These regional variations by state may be expected or excused, because of the great difference in laws between states regarding the death penalty as well as differing crime rates and populations.  However, the true evidence of geographical arbitrariness lies in county variations, as the death penalty is not applied equally over states.

Fifteen counties in the United States accounted for 30% of executions since 1976 even though they account for less than 1% of counties in states with the death penalty.  A just law would not be executed solely based on the chance of a crime being committed in one small region or another, especially when the consequences are the ending of another life.  Another geographical concern is that states vary by the quality of representation, one of the important factors in deciding whether or not a defendant receives the death penalty.  Texas, Washington, and North Carolina have all shown in studies that a disproportionate number of the defense attorneys in cases where the death sentence was handed down were later disbarred, suspended, arrested, disciplined, and/or put on probation.  Fundamental constitutional rights of the accused are the right to proper counsel and a fair trial, and the enforcement of the death penalty highlights the infringement of these rights.

The death penalty is a symbol of an unjust justice system, where the ability of a defendant to afford proper counsel could mean life or death, where the unseen actions of others could bring death to a nonviolent offender.  The race of the victim could be the difference between a lethal injection or life imprisonment.  Whether the crime was committed in Harris County, TX or the next one over could factor into the sentence the judge hands down.  The system is arbitrary.  A serious punishment, death row, cannot justly depend on random factors such as race, geography, or quality of an appointed defender.  With no clear solution to the arbitrariness issue, Harry Blackmun came to the same conclusion as Brennan: “It [is] impossible to administer the death penalty in a constitutional manner…”

[Image Attribute: Death Penalty Focus]
Disclaimer: The views and opinions expressed in this article are those of the author and/or student and do not necessarily reflect the official policy or position of United 4 Social Change Inc., its board members, or officers.
Tags:arbitrarinesscrimedeath penaltyprison industryracism 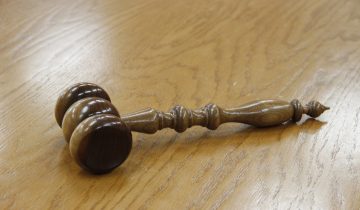