The production of cement, which uses enormous amounts of heat and energy and produces CO2 emissions, is harming the world significantly and causing climate change which has been affecting the world’s weather. Then there are many other factors in the production of cement in which the industry can cause harm to many people, especially workers and neighborhoods that live nearby these dangerous factories. Cement production has to be terminated because it endangers the environment, us, and even the workers themselves.

Why Is Cement A Big Factor?

The cement industry is huge and full of potential. The basic cement is used in construction or binding different materials together. When the cement is produced, it generates carbon dioxide. The cement mixture is used to produce concrete, which builds tall architectures, so cement is commonly used in architectural constructions. Since it is so commonly used, it generates billions of tonnes of carbon dioxide every year. However, buildings in the world are projected to double in the next decades. It is a huge risk because creating more cement will release more carbon emissions, which will cause climate change.

A more in-depth way to look at climate change is by looking at how much damage the cement industry is producing. After coal-powered electricity, cement production is the next highest producer of greenhouse gases. Cement manufacturing contributed 8% of global carbon dioxide production annually. Thus, cement use is a troubling matter involving climate change. The manufacturing of cement is even more dangerous since the materials of cement are toxic and also burning at a high temperature (2700 F). These toxic materials will flow into the atmosphere, which will worsen the whole air quality and lead to other potential environmental damage- the greenhouse effect. The pollutants from the concrete ingredients and the fumes containing carbon dioxide are producing greenhouse gases which will rise up to the ozone layer and eventually get trapped. This will lead to global warming because the greenhouse gases will lock heat into the atmosphere. Cement manufacturing has a bigger carbon footprint than any other industry- for every metric ton of cement produced, a metric ton of carbon dioxide is produced. Thus, the impact of carbon dioxide released by cement is significant. China is the leader in producing cement; therefore, they produce the most carbon emissions. If the techniques of producing cement are still used, hundreds of thousands metric tons of carbon dioxide will enter the atmosphere.

So how does cement affect us, humans? First of all, if the world is environmentally impacted because of cement emissions, it will consequently harm us too. If concrete dust cannot be well handled, the results are dangerous. When humans are breathing in this toxic air, they can also develop major health issues, deadly diseases, and other illnesses due to poor air quality. Our lives could be in jeopardy because of the increased risks of our health. There are many more health hazards to us when we inhale cement dust- for example, lung infection or other diseases related to the respiratory system. Although we’re not directly inhaling them, cement dust will still be floating around the atmosphere, so our risk of getting these illnesses are possible.

Working in the cement industry is dangerous; not only are there health issues for themselves, but there are also safety issues involved. In this industry, there are more than 250,000 workers that work in concrete manufacturing alone. There are many safety hazards that are involved, including working machinery that can sometimes have failures, with a risk of workers getting injured. Workers may harm themselves by slipping, tripping or falling because of awkward postures while working in an unusual position. The death rate in this industry is also very concerning- 42 workers died in a year because of the lack of safety equipment. Thus, it shows how the cement industry needs to be stopped until better conditions are offered. The workers can get injured via contact with wet concrete which will cause chemical burns on the skin. Then, there are the respiratory issues that the workers are facing because continuously breathing into concrete dust will cause irritation to their noses and throats, causing them to choke and making it hard to breathe. In addition, the safety equipment that the workplace offered is grossly unacceptable. Workers may also get hit by falling objects. There are many more safety issues behind this dangerous industry.

Here’s a real-life example of a worker’s life being ruined- there was a normal laborer who sold cement for years, inhaling cement dust every single day. Eventually, the cement dust caused his body systems to malfunction. It started off with his mucus turning dark and long term coughing. Then, he started snoring during his sleep and needed painkillers, but that didn’t help at all. Finally, he went to the doctor to get some medical attention. After the checkup, he had been diagnosed with bronchitis. What we get from this story is that cement dust can actually impact our lives. Therefore, there must be a set of safety guidelines and better safety equipment, so the laborers’ injury rate can be minimized. For the workers’ safety, the cement industry must be terminated.

Resolutions And Alternatives to Cement Usage

Some companies are using biotechnology to create new concrete bricks. For example, a company used trillions of bacteria and sand to create bio-concrete bricks. Another added the idea of grass with concrete- Grasscrete, by laying concrete with enough space for grass to grow and fill in gaps. This not only reduced the use of concrete but added the absorption of rainwater because of grass. Many companies added natural materials to construction such as wood, bamboo, or ash. Using alternative ingredients in cement is also possible, like substituting the use of clinker, the material that emits the most carbon dioxide. Some suggest replacing clinker with fly ash or blast furnace slag. There’s another way of reduction, which is to reuse or recycle the concrete from past buildings into future projects instead of producing more concrete. There are many alternatives that could be used; the goal for the future architectures should be getting involved in using natural materials to build structures and searching for resolutions on how to reduce cement usage.

[Image Attribute: Kitmondo Marketplace]
Disclaimer: The views and opinions expressed in this article are those of the author and/or student and do not necessarily reflect the official policy or position of United 4 Social Change Inc., its board members, or officers.
Tags:carbon emissionscementClimate Change 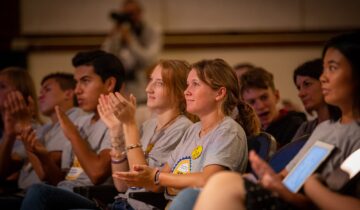 The Urgent Need for Youth Representation