It seems that almost every day it is on the news that there is another mass shooting. With that comes the outpouring of thoughts and prayers from all over the world. Then just a short time later, these devastating incidents are forgotten, and people forget about all the lives that were taken. But with these thoughts and prayers comes no action to help prevent these tragedies from ever happening again. People are always shocked at the level of violence humans are capable of, yet many do not seem to want change. In the aftermath of the most recent mass shootings, it is necessary for legislative action to put restrictions on assault weapons because of the number of deaths that have resulted from the use of these deadly guns.

When most people think of mass shootings, one of the first that comes to mind is Columbine in 1999. This murder of thirteen students and teachers shocked the world, as it was one of the first major shootings of this caliber. Following this shooting, major changes were made in terms of law enforcement. Previous to this tragedy, police officers were not well equipt to protect everyone from these shooters. Training was given to these officials to improve reaction time to the scene, in order to prevent further damage. There has also been an increase in school safety protocol to make the classrooms a more secure place. Then there was the shooting at Virginia Tech in 2007, which left thirty-three people killed, making it one of the deadliest shootings in history. Next came the Sandy Hook shooting which shook the nation, as it killed twenty-seven people, including twenty first-graders. Some other major shootings include Charleston, Pulse night club, and Las Vegas. The shooting at a concert in Las Vegas left fifty-eight people dead, making it the deadliest mass shooting in American history. These are just a select few of the hundreds of shootings that have happened in America. A majority of the deadliest shootings were done with assault rifles, commonly used in the military. There is no need for this type of gun to be accessible to almost anyone.

Then on February 14, 2018, seventeen people were killed at Marjory Stoneman Douglas. This sparked a fire inside of several of the students as they had enough and formed the March for Our Lives Movement. The survivors of this shooting went to the national stage and held the March For Our Lives in Washington D.C. They also went and talked to lawmakers in hopes to increase gun safety laws so no more mass shootings would happen again. They are still continuing to fight for this cause over a year later, and with dozens more mass shootings occurring, they hope to help put a stop to this deadly trend. Their passion for change is very important for the United States because it is necessary for there to be a new generation of activists to help make a difference.

Aftermath Of The Recent Shootings

In under twenty-four hours, thirty-one people were tragically killed by gun violence. First, a shooter walked into a Walmart in El Paso, Texas and killed twenty-two people, and injured fifteen more. Then everyone woke up to the horrifying news that nine more people had died in a bar in Dayton, Ohio. In just a short amount of time, there were thirty-one families who found out they lost a loved one because of gun violence. Once again, many people offered their thoughts and prayers to those affected by the shootings. It was the same situation as all the other mass shootings that have happened in recent years. It would be on the news for twenty-four hours, then a majority of people would move on and forget about the horrific events that had happened just a few short days before.

Following these shootings, President Trump tweeted about how Americans should be focusing on pairing these tragedies with stricter immigration laws. His reasoning was that it can tie into stronger background checks, which many people have been demanding. Trump also criticized the racism and white supremacy portrayed by the shooters. In a speech given at the White House, Trump went on to explain how there needs to more focus on mental health and restrictions on violent video games. He did not mention the need for more gun laws because he found other reasons to blame for the shootings. It is clear the guns are one of the main problems because of how many people can be killed in such a short period of time due to the speed of these assault weapons. With stricter laws on these weapons, the number of gun deaths could greatly decrease because the shooter could be caught before more damage could be done.

In a study shown by BBC, there are 120.5 firearms per 100 Americans. The next closest country is Yemen at 52.8 guns per 100 people. This statistic shows how many guns Americans own, making them more susceptible to gun violence. While many think weapons are only dangerous in terms of mass shootings, a much larger proportion of gun deaths are suicides. If there were stricter gun laws, so many lives would be saved by decreasing the number of gun-related suicides and mass shootings.

The United States has the most mass shootings out of any other countries, yet has done the least to try and prevent them. After New Zealand shootings at mosques killed over fifty people, Prime Minister Jacinda Ardern immediately banned all assault and military level weapons. The United States needs to follow the lead of the countries who have taken legislative action because it is proven to decrease the number of gun deaths. While the United States did ban bump stocks in 2018, which increase the speed of the bullets after being shot, they still need to do more though to lower the number of gun deaths because so many lives have been taken by violence that can almost always be prevented.

How The World Has Reacted

As expected, everyone offered their thoughts and prayers then moved on with their lives. But there are still many people who want to make a difference and get laws passed to prevent more deaths. As previously mentioned, the students who survived the Parkland shooting have become strong activists for gun control, and have gotten many other people on board with them. Since so many people have been affected by gun violence in recent years, they too have been fighting against the government to get them to take legislative action. Many celebrities have also joined this fight because so many are disgusted with how these shootings are being viewed. It is very important that there are so many people who are advocating for these laws because hopefully, it will gain the attention of lawmakers.

There is also the other side of the argument that has to do with the constitutional right to own guns. Their beliefs put any proposed gun laws on hold, preventing protective measures from actually getting implemented. On the same idea, there are many people who say they need these types of assault weapons for hunting. Although these justifications are valid for some, there is still no real need for assault weapons to be available to anyone. If they were going to be sold to an average American, they need to have a very detailed background check and mental health evaluation to make sure they will not use this weapon for harm.

To ensure the safety of all people within the United States, more needs to be done when selling guns. Assault weapons should not be sold to just anyone because it is shown by the hundreds of mass shootings, that they have the ability to take innocent lives. There also needs to be deeper mental health evaluations because of how many gun-related suicides there are in America. One of the main solutions should be for President Trump to acknowledge the shootings and not blame anyone but the shooter. He also needs to realize the main issue stems from the guns and not any type of violent video game. It is vital for the United States to take action against gun violence and follow the lead of countries that have made essential changes so there is no more need for endless thoughts and prayers for victims of mass shootings.

[Image Attribute: Mike Licht]
Disclaimer: The views and opinions expressed in this article are those of the author and/or student and do not necessarily reflect the official policy or position of United 4 Social Change Inc., its board members, or officers.
Tags:Gun Controlgun safetymass shootings

Hong Kong Police Is The Cause Of These Massive Protests 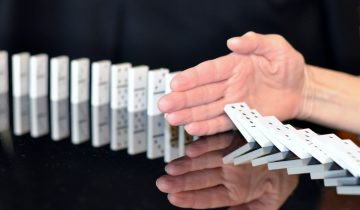