On Saturday, August 3, a massacre occurred. Patrick Crusius, a 21-year-old white supremacist, was suspected of shooting down a Walmart in El Paso, Texas with an AK-47-style assault rifle, killing 22 people and injuring 24 others. Crusius wanted to stop a “Hispanic invasion of Texas” according to a manifesto police believe he wrote. The manifesto also stated that his goal was to separate America into territories by race after he believed the white population was being replaced by foreigners. Hours after the El Paso shooting, 24-year-old Connor Betts opened fire in a nightlife district in downtown Dayton, Ohio, killing nine people and injuring over two dozen. Similar to Crusius, police found writings showing that Betts had an interest in murder.

Even after America’s countless mass shootings, including the more recent Parkland High School and Pittsburgh synagogue shootings, Congress has yet to have done anything. And the most alarming fact about these mass shootings in America is that they are becoming… well, normal. Gun violence in the United States has been a rising epidemic, and gun control laws must be established by Congress for any possible change to occur.

Gun Violence In The United States

The United States certainly stands out when it comes to firearms. It is one of the only countries where the right to bear arms is protected by the country’s constitution. But the country’s relationship to firearms takes a turn for the worse in a very important way, as it is by far the most homicidal developed nation, mainly due to how easy it is to access a firearm.

In the United States, a firearm license, registration, reason for purchase, safety training, and safe storage procedures are nonexistent, making it extremely easy for a criminal to access a firearm.

From having no secure process of accessing a firearm and the sheer amount of the population who own a firearm, there have been over 2,000 more mass shootings since the Sandy Hook Elementary School shooting in 2012. In addition, there has been an average of one mass shooting per day in America.

In addition, we can prove that the higher number of guns cause more gun deaths, as studies have shown that states with a higher percentage of gun ownership have more gun deaths per year. Another similar study has shown that “States with tighter gun control laws have fewer gun-related deaths”.

How America is Treating Gun Violence

Six days after the Christchurch Mosque attack in New Zealand, Prime Minister Jacinda Ardern announced a ban on “military-style” semi-automatic rifles. This begs the question, why isn’t the United States doing the same? After the countless shootings in the country, Congress has done little in addressing gun control reforms.

The National Rifle Association (NRA) is one of the most influential groups in US politics. They oppose proposals to strengthen firearm regulations and spend a great deal of energy by creating arguments about the wording of the Second Amendment. Also, they suggest the real problem to the gun violence epidemic is mental illness or violent video games, but not guns. Their single-minded focus on avoiding gun regulations and restrictions has brought them success after success. But having this mindset will not bring any change to this epidemic, and the violence will only grow.

One of the biggest arguments that pro-gun supporters use is about the Second Amendment, the right to bear arms. They argue that the Second Amendment of the US Constitution protects individual gun ownership. Although this is true, the Second Amendment is not an unlimited right to own guns. Former Associate of the Supreme Court Justice Antonin Scalia, LLB, stated, “Like most rights, the right secured by the Second Amendment is not unlimited… nothing in our opinion should be taken to cast doubt on longstanding prohibitions on the possession of firearms by felons and the mentally ill, or laws forbidding the carrying of firearms in sensitive places such as schools and government buildings, or laws imposing conditions and qualifications on the commercial sale of arms.” This means that there should be regulations on firearms which people are accessing, while not taking away their rights.

An argument proposed to the government in favor of gun control is that procedures and requirements should be strictly enforced to access a gun, and high-capacity magazines should be banned because they too often turn murder into mass murder. But, pro-gun supporters argue that gun control laws infringe upon the right to self-defense and deny people a sense of safety. Even though background checks and procedures would be strict, they could save lives. If a person wants to access a firearm, they can still do so as long as they pass safety procedures to minimize the risk of these firearms falling into the wrong hands. Additionally, saying that banning high-capacity magazines deny people a sense of safety is unrealistic, since, in the need of self-defense, you would almost never need that much ammo.

One last popular pro-gun argument is that gun control laws such as background checks and micro-stamping are an invasion of privacy. Even though this is true in some cases, invasion of privacy is not worth the societal costs associated with gun violence. Having these background checks would not only decrease gun violence, but it would actually support the economy, as researchers have calculated that gun violence has had an annual price of $229 billion.

The solution to gun violence? Well, there is no easy answer. Any solution will be better for some people and worse for others. But, if we want to keep the country safe by decreasing mass shootings, the best way is to enforce gun control laws. That way, our country will be safer, and good citizens can still access a gun. Doing so will boost our economy, and ultimately, have a positive influence on society. But in order to do so, we have to come together as a country and demand gun control laws to be enforced by the government, urgently.

This OpEd was written by U4SC Student Intern, Anish.

[Image Attribute: Clyde Robinson]
Disclaimer: The views and opinions expressed in this article are those of the author and/or student and do not necessarily reflect the official policy or position of United 4 Social Change Inc., its board members, or officers.
Tags:Gun Controlgun legislationmass shootings 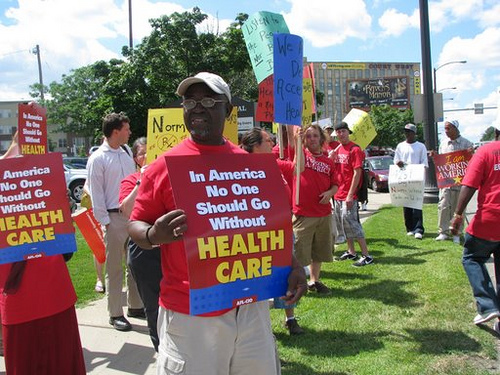