Current Use of Voting by Mail

With the number of COVID-19  cases still escalating in some areas of the nation, states are struggling to find a way to continue elections while ensuring the safety of their residents. The danger of in-person voting can be seen in Wisconsin, where government officials decided to hold the Democratic primary election in April despite widespread concern of infection. As a result, more than 50 people who voted or worked at the polls were diagnosed with COVID-19. As such, many states have worked to increase the use of absentee ballots and mail-in voting in hopes of promoting election participation. However, opponents claim that cases of voting fraud will surge with the increased use of distance voting. The rhetoric that mail-in ballots and absentee ballots allow voter fraud is unfounded, as these forms of voting are an unbiased way to promote greater voter participation.

The idea that Americans can vote somewhere other than a physical voting booth in their precinct is not a recent trend. The practice of absentee voting first appeared during the Civil War in order to allow soldiers from the Union and Confederate armies to vote in elections back home. However, there was no uniform system, so ballots were often mailed to family members to cast in their place. The process was formalized in the early 1900s when ballots from soldiers and later, civilians, could be mailed to election officials. These cases required that voters have a reason for voting absentee, such as illness or travel. Later, laws like the Uniformed and Overseas Citizens Absentee Voting Act (UOCAVA) began to mandate that states allow absentee voting for certain citizens. In 1988, Oregon began mailing out all its ballots with Washington and Colorado to follow. The origins of distance voting as a way to allow soldiers and traveling or ill citizens to cast their vote displays the nonpartisan intent of mail-in and absentee ballots. Furthermore, researchers from Stanford University who studied the introduction of mail-in voting in California, Utah, and Washington found that it did not have a significant skew on voter turnout for Democrats or Republicans.

In the past weeks, the controversy over distance voting has been largely fueled by President Trump’s public criticism of state efforts to increase voting by mail. At a Michigan Ford factory, the President claimed that “to really vote, and without fraud, you have to go and you have to vote at the polling place”. On the other hand, experts have stated that there is little evidence to support the claims of voter fraud in mail-in voting. Trump’s arguments have also been riddled with inaccuracies; he previously stated that Michigan illegally sent out ballots and threatened to withhold funding when the state actually sent out absentee ballot request forms. The disregard of facts and evidence from the White House points more heavily to fears of a Democratic victory than a fight for election integrity.

Using voter fraud as justification to restrict the electorate is not a new tactic; advocates of voter ID have also used the same argument to needlessly inhibit the ability to vote. However, studies after studies have disputed the belief of widespread voter fraud. A study from Loyola Law School Professor Justin Levitt determined only 31 incidents from 2000 to 2014 in a time period where more than a billion votes were cast nationwide. Additionally, a five-year study authorized by George W. Bush, the Justice Department found essentially no evidence of organized voter fraud. Although, the private nature of mail-in voting opens additional possibilities of fraud, states have implemented extensive countermeasures. Some, such as Colorado, Oregon, and Utah, match voter signatures with the ones in voter rolls or use barcodes to track ballots. Other states like Arizona limit third party submission of ballots to just household members and caregivers. Thus, those opposing mail-in and absentee voting are basing one of their leading arguments on baseless facts.

With the vast support from Americans, there is no denying that mail-in ballots are an effective approach to voting during a worldwide pandemic. By voting from the safety of their homes, citizens can participate in the democratic process without risking their health or the health of loved ones. However, new regulations may be necessary to assure Americans that elections will be conducted as fairly as possible. A May poll from Gallup shows that 64% of Americans support “allowing all voters to vote by mail or absentee ballot in this year’s presidential election”; however, 49% believe voting through mail would result in more fraud. To ease their concerns, ballots should possess various security measures to verify voter identity. For example, poll workers should be trained in verifying signatures and each ballot must go through a multitude of checks to determine validity. Although a large number of states have already instituted these measures, states with lower numbers of mail-in ballots must also establish a uniform system of verification. With bipartisan effort from government leaders, distance voting can be expanded into a safe and secure process for the electorate.

Disclaimer: The views and opinions expressed in this article are those of the author and/or student and do not necessarily reflect the official policy or position of United 4 Social Change Inc., its board members, or officers.
Tags:BallotGovernmentvoting

Effect of Climate Change on Coral Reefs and Humans 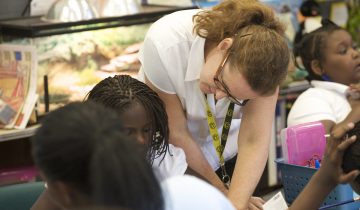