On May 26, Twitter took a bold move. The popular social media site started to flag President Trump’s tweets for false, misleading, and dangerous claims. The President, an avid user of Twitter, consistently employs the platform to diffuse his views, thoughts, and emotions to his followers, averaging about 29 tweets per day. The President’s statements, through press conferences, public statements, and Twitter, have consistently brimmed with misleading claims. Whether it be claiming that mail-in ballots will be rigged or that injecting UV light and bleach into the body can help fight COVID-19, there has recently been a disturbing growth of misinformation in the United States. 2020 has provided a deadly COVID-19 pandemic that has affected millions across the country and the world. In addition, the tragic and unjust losses of Ahmaud Arbery, Breonna Taylor, and George Floyd have sparked a nationwide rally for racial justice, social reform, and an end to police discrimination and brutality. Both the pandemic and Black Lives Matter movement present as open platforms for many false and misleading claims. The spread of misinformation surrounding these recent monumental events is dangerous; the maintenance of truth is becoming increasingly relevant. Misinformation is currently diffusing across the United States at a rapid pace, and we must push against falsehood and protect the integrity of truth.

The Negative Influence of Misinformation

Fake news spreads like wildfire. With the dominant presence of social media in our lives, it has become incredibly easy to concoct and spread misinformation. Technology is omnipresent today, making misinformation incredibly accessible. Misinformation can be spread either inadvertently or intentionally manipulated to cause destruction. Fake news can accidentally be mistaken as true, which results in an unintelligible blend of the true and false. Notably, teens, in particular, are susceptible to unknowingly believing fake news. However, it is not only teens that fall into misinformative traps; adults—whether youthful or elderly—can, too, be easily swayed by malicious falsehoods on the Internet. People can also deliberately attempt to thwart governments, intensify social conflict, and amplify or disrupt a movement. Internet trolls are common, and many work to divide people—to turn them against one another or to spark a movement against a particular person or group. The deliberate spread of fake news causes disorder and commotion, which was demonstrated in the 2016 conspiracy theory, Pizzagate. This chaos produces major challenges for the effective operation of a society. When misinformation spreads, either accidentally or intentionally, people’s beliefs and thoughts change. These changes have the potential to compel negative actions and perspectives. Especially in the crisis of 2020, this spread of fake news can lead to the deaths of countless people.

Truth’s Significance in the Calamity of 2020

Misinformation is rising at a disturbing rate. A review by the New York Times found that between May 24 and May 30, 26 of the President’s 139 tweets contained false claims. This high concentration of misinformation coming from the leader of the United States has major ramifications for the country’s current crisis. In addition, there have already been misleading claims about authorities having tampered with protestors’ cell phone communication in the 2020 Black Lives Matter protests. The now infamous “Plandemic” conspiracy video that spread alarmingly false claims about COVID-19 gathered millions of views all over social media and disseminated loads of audacious and misleading accusations and statements. This accumulation of misinformation has dire consequences that necessitate immediate action, especially in the current unstable situation the United States is in.

Truth is clearly faltering. The irony is, however, that truth is becoming increasingly relevant just as its integrity is faltering behind. The current COVID-19 pandemic has infected millions and killed hundreds of thousands across the globe. Truth is integral to fighting this pandemic and therefore saving lives. Experts and doctors do their best to spread awareness about the deadly virus, and to do so, they employ the truth. If experts were to give misinformation to the public, there would be a massive wave of negative consequences, depending on the claim. On a similar scale, national television programs, specifically Fox News, have repeatedly dismissed the severity of the pandemic. The channel has called the virus a hoax, and one host even stated that she was “far more concerned with stepping on a used heroin needle than [she] [was] [with] getting the coronavirus.” Fox News has millions of American viewers, many of whom are susceptible to believing the acclaimed network’s dismissal of the virus. If these people do not take precautions just because they believe that the coronavirus is fake or not an immediate threat, they put their own lives and others’ lives at risk. This ignorance of the truth is threatening innumerable lives across the country. It is of utmost importance for Americans to become aware of what is true and false so that they can take the correct precautions that just might save their lives.

The Black Lives Matter protests have risen all over the country to counter the racism that unfortunately still exists in the United States. A tweet from the President that has faced a massive storm of criticism, once again, threatened the truth as well as the lives of his fellow Americans. In that fiery tweet, he branded protesters as “THUGS” and commented that “when the looting starts, the shooting starts,” a phrase used in the 1960s, to express bigotry against black people. These startling remarks from the President teem with blatantly false claims. Calling the protestors who were rallying for justice “thugs” is misleading, and his statements have undoubtedly changed many people’s perceptions toward the protestors. When protestors are associated with “thugs,” they are posed with the potential threat of being attacked by people who think that they truly are thugs.

We are about half-way through 2020, and through all this chaos, it becomes clear that a lack of truth has the disturbing ability to cost people their lives.

Mark Zuckerberg, the CEO of Facebook, has taken no action upon the fake news spreading on his social media site. Zuckerberg’s actions have rightfully sparked outrage and mass criticism. Hundreds of Facebook employees gathered for a virtual protest against Zuckerberg’s decision to remain static while the President and many others contaminate the truth. Some workers have resigned from Facebook, finding it impossible to work under conditions where the company would refuse to ban speech that glorified violence and misinformed users.

Zuckerberg claimed that restricting the President and flagging misleading posts would infringe upon Facebook’s policies, which uphold the right of free speech. Facebook would not be the “arbiter of truth,” according to Zuckerberg. It is certainly valid to respect freedom of speech, a vital facet of the First Amendment. However, this situation presents a difficult decision: whether (1) to validly inform users of misinformation and caution them from the contents of an inflammatory post or (2) to allow people to spread false claims and possibly cost people’s lives simply for the sake of free speech. Zuckerberg’s decision deserves to be respected. However, the integrity of the truth must be protected in as many circumstances as possible, and by banning senseless and extravagantly misleading information, the truth will maintain its deserved stability. At this point in time, the preservation of truth is more immediate than the preservation of free speech.

Facebook ought to take immediate action against misinformation, largely because of its stance as the largest social media platform in the world. If Facebook follows Twitter’s lead in honoring the truth, lives will be saved, trolls will be suppressed, and people will have a better grasp of reality.

A Push Against Falsehood

The executives of social media giants are not the only ones expected to take action. We—many of us being active users of social media—must willingly halt the contamination of truth. The spread of misinformation is rooted in its users. Countless users blindly repost messages that influence, empower, startle, disturb, or generally evokes them, without realizing their contribution to the spread of misinformation. This constant reposting is a catalyst for fake news. Therefore, we must think first before we post or repost. Whether that be checking the sources or searching up key aspects of the suspected information on the Internet, we must always challenge questionable information to preserve the truth. In addition, we must directly confront and correct misinformation. If a social media connection posts misleading or false claims, it should be a duty to immediately restore the truth by informing the poster and urging a rectification of his or her claims. These steps are minute and subtle, but they can have an unfathomable impact on the maintenance of truth.

The Future of Truth in America

Politics often get messy and can block people from being correctly informed. Much of national television is politicized, choosing to tilt presented information in favor of their political party. They may specifically choose what stories to cover, depending on their political stance. For instance, Fox News is known to be more conservative, whereas CNN is known to be more liberal. While Fox News will detract from COVID-19 coverage to focus on a conspiracy surrounding Obama, CNN will focus a great deal on COVID-19 and barely acknowledge the anti-Obama conspiracy. As mentioned before, Fox News even went so far as to call the virus a hoax, minimizing it to an extraordinary extent. The United States seems to be headed in the direction of an even more politically dichotomized nation. The more politics intervenes with news coverage, the more obscure truth will get. The choices that the media can make a tremendous difference in whether people will receive true information or not. Politics should not intervene with the truth.

Influential people wield the potent ability to sway a massive amount of people. Truth starts with leadership. If the nation has a leader that can elevate and dignify the truth, the people following that leader will become more likely to know the truth and spread the truth. Comparing this ideal to that of the current situation, where the President of the United States recklessly declares false information, the truth will be much better handled. The future of truth relies on the next leaders and their choices, actions, and beliefs. We can either choose these next strong leaders or become the next leaders in order to sustain and revive the truth.

Disclaimer: The views and opinions expressed in this article are those of the author and/or student and do not necessarily reflect the official policy or position of United 4 Social Change Inc., its board members, or officers.
Tags:americafake newsmisinformationtruth

The Undue Burden of Student Loans 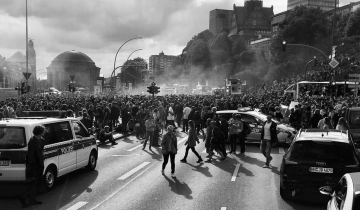