Why Fracking Does Much More Harm Than Good

Hydraulic fracking has become of increased importance in past presidential elections, and remains of importance going into this fall’s election season. This practice, simply referred to as “fracking,” is the “process of injecting liquid and materials at high pressure to create small fractures within tight shale formations to stimulate the production and safely extract energy from an underground well…” Even though this process has been advantageous in the United States economically, the debate over fracking is extremely two-sided.

During his presidency, Barack Obama advocated for fracking, but passed legislation to place regulations on the practice to prevent further methane pollution. At the start of his current term, President Trump appealed Obama’s policy, lifting restrictions and allowing fracking to be legal in all 50 states. However, state governments, such as Vermont and Maryland, have outlawed the practice.

As fracking continues to be a politically-debated topic that undergoes a large amount of legislation, it is imperative to weigh the pros and cons. When considering all aspects, the negative consequences of hydraulic fracking outweigh the positives, and the United States should make fracking illegal. Although there is a valid case for how fracking has indeed been a positive practice in the States, the negative outcomes make this a practice that must become illegal.

Fracking originated in the United States in 1947 but did not become a popular way to source natural gas until the 1970s, when petroleum and crude oil exports were banned by Congress. From this point, research and development of fracking has continued to the state it is at today.

Fracking is currently legal under federal guidelines, but different Acts have led to questions surrounding when and where fracking is legal. For example, the passing of the Safe Drinking Water Act in 1974 resulted in a Supreme Court ruling that the guidelines of this act did not pose any regulations on fracking. This is just one example, but essentially there is no federal law that prohibits the practice of fracking or sets strict enough guidelines to prevent any negative effects.

In our current political climate, Trump has taken the stance that fracking opens up more job opportunities in our energy-sourcing industries. He appealed the Obama administration’s fracking guidelines, and is instead researching possible effects of fracking in concentrated areas, such as California. Candidate Joe Biden plans to propose a “no new fracking” policy if he is elected, meaning that no new drilling may occur, in hopes of lowering natural gas use. President Trump has made changes regarding fracking during his time in office, but the constant political battle demonstrates that a final decision, like outlawing fracking entirely, is a necessary step forward.

Why Fracking Should Be Made Illegal

There are a number of consequences that explain why fracking should be illegal, including an increase in greenhouse gas leaks, contamination of drinking water, and a rise in the number of earthquakes.

Fracking has contributed to an abundance of oil, and thus, lower oil prices. With this comes an increased amount of national transportation, which has caused a 3.3% increase in greenhouse gas emissions. Greenhouse gases trap heat in our atmosphere, contributing to global warming and the globe’s climate change crisis. Instead of utilizing clean energy sources such as electric, low oil prices due to fracking have systematically caused the production of more gas-fed transportation methods, and this is a slippery slope that will lead to a significant negative impact on the entire world, not just the United States.

It has also been recently reported that there exists a relationship between unconventional energy sourcing and earthquakes. Over the past 20 years, a rise in the number of national earthquakes has occurred in response to the growth of fracking and shale gas sourcing. This is a consequence that will continue to persist and lead to much more geographical damage if unconventional energy sourcing is not halted.

Do Positives Of Fracking Exist?

Short answer: Yes. Do these positive effects outweigh the negative aforementioned consequences? No, they do not. It would be ignorant to not acknowledge the positive effects that fracking has had on the United States. Fracking has enhanced the economy, created 725,000 jobs, and aided in reducing emissions from burning coal. Although these are valid reasons as to why fracking should not be outlawed, the debate is still overwhelmingly in favor of the anti-fracking side.

Keeping fracking legal with the justification that it preserves jobs and assists in eliminating nitrogen oxide emissions from coal-burning is a bandaid on the United States energy crisis. If fracking was made illegal, a focus could be found on expanding clean energy industries, which would conserve our environment in the long run. Yes, fracking is a better alternative than other energy sourcing, but it is still not the best choice. For the sake of the environment, fracking should be made illegal and an economic shift towards clean energy industries must occur to keep the economy intact.

Overall, the practice of fracking is very much a two-sided political debate at this point. The consequences on both sides are wide-scale and deal with the economy and climate change, making this a hard topic to conquer. Moving forward, conserving the environment is imperative, and the negative consequences of fracking outweigh the positives. Fracking should be made illegal in the United States to assist in tackling climate change, and to promote industries that create clean, sustainable energy.

Disclaimer: The views and opinions expressed in this article are those of the author and/or student and do not necessarily reflect the official policy or position of United 4 Social Change Inc., its board members, or officers.
Tags:Climate ChangeContaminationFracking 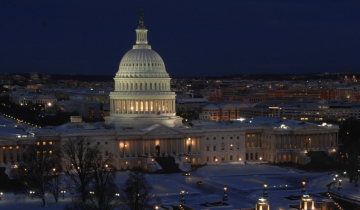 The Debate of D.C. Statehood