TikTok is an app where you can make 15 second-3 minute videos. It used to be called musical.ly. Before it was called TikTok, only kids used to be on the app, but now there are teens and adults on the app. With there being grown people on the app, more political and social problems are being talked about on the app. But the one social problem that has stood out is racism. TikTok favors white content creators by pushing their content to get more views and likes, while they censor black content creators’ content, so they don’t get the views, likes, and followers they deserve.

She Needs Her Credit

An example of when TikTok pushed a white content creator’s content more than a black content creator’s content is when the renegade dance became popular on the app. TikTok failed to explain how the original creator of the dance was Jalaiah Harmon because “The TikTok algorithm that recommends videos for viewers elevates white creators.” It made it hard for people to know that Charli D’Amelio didn’t actually create the dance, and Jalaiah missed out on several opportunities because of this. This dance got Charli many opportunities, and Charli “became famous for using and not originally crediting a Black creator for a TikTok dance.” Because Jalaiah’s original video wasn’t being pushed out, people didn’t know and just assumed it was Charli’s dance. This got noticed by the black community, and they vouched for Jalaiah to get her credit for the dance, and she got the credit she deserved. She even went on the Ellen show and got to perform at the Superbowl. Once everyone knew the true creator of the dance, Charli started giving Jalaiah her credit too. But this was only the beginning of people finding out and calling out how racist TikTok is.

What’s Wrong With The Word Black?

More and more P.O.C. started to speak out on the racism going on in the app and calling out racist people on the app. People even started using BLM tags in their bios and tagging BLM in their videos to show their support for the black community. Racists didn’t like this, and without explanation, any video of someone supporting BLM, speaking out on the racism on the app, or anything that has to do with black people, TikTok took those videos down for “hate speech.” TikTok even went as far as to demonetize the word black and anything that has to do with BLM and supporting black creators. But when black people express their concerns and issues with the app and racist people on the app, TikTok ignores it and doesn’t do anything to help solve these concerns and issues. A solution to this, as said in this Wellesley blog, could be that “By uplifting Black creators and engaging with their concerns, TikTok can move toward representing the best popular art and entertainment of our society.” TikTok needs to have the same energy they have in solving white “problems” with solving issues when it comes to black problems and the black community.

Since TikTok seems to favor white people, racists are comfortable being racist on the app because they won’t have any consequences from TikTok. Of course, there are going to be people disagreeing with their racism, calling them out, and reporting their videos, but those racist videos never get taken down until they are viewed by thousands and go viral. And the people who make these videos never feel sorry until their actions come back and bite them in the arse. An example of this is when a white couple made a racist TikTok and posted it, not thinking anybody would see it, which doesn’t excuse them at all. This video got viewed by thousands and shared to other social media platforms like Twitter, where it also became viral. People who viewed this proceeded to contact their college and share the video with their college. This, of course, affected their ability to be enrolled in the school, and they got expelled. The girlfriend Stephanie Freeman then went onto social media to apologize and said, “blacks are human too, made in the image of Christ” which she wouldn’t have said if there were no consequences to her actions. She also proceeded to say that the consequences she got for being racist were “not fair.” I believe that if you claim you’re not racist but surround yourself with racist people that you are racist and only claim you aren’t when it’s convenient to you. In this case, that’s what Stephanie did because she tried to put all the blame on her boyfriend, Jeffrey Hume, by claiming that he “slowly normalized his racism” with her.

Several videos that have somebody speaking about BLM or the racism that’s apparent on the app get taken down, especially if they’re speaking out about racist content creators on the app that love to appropriate black culture. TikTok’s community guidelines say that racist content will not be permitted, but racist content always seems to pass the community guidelines. They should be more aware of the content that people post so the racism on the app could die down. “When black creators would flag racist videos to the company, they would often get a response that said: ‘This does not go against our community guidelines‘”; this solidifies the fact that TikTok doesn’t apply their community guidelines when it comes to actual racist videos. TikTok needs to have stricter guidelines and actually monitor if the videos being reported go against the guidelines. There should be no way that a clearly racist video gets reported multiple times and doesn’t get taken down. There should also be no way that the creator of said racist video doesn’t face any consequences. This makes people feel inclined to make more racist videos because they aren’t facing consequences for clearly being wrong. This proves that TikTok is okay with the racism and actually encourages it.

TikTok apologized to black creators for the racism on the app and how the algorithm is so against them, but they did very little to change. Yes, there was more diversity on the for you page, but the racism, of course, was still apparent. Black people still have to worry about how their videos will do because of the color of their skin. A white person and a P.O.C. could make the same content and/or video, but the white person’s video and/or content will do better than the P.O.C.’s video. TikTok creators keep pointing out the favoritism and nothing is being done about it: “‘Whether it’s Latino or Asian or whatever you are, I feel like it’s way harder to go up on TikTok if you are not white,’ TikTok creator Noah Webster said.” TikTok preached about wanting diversity and supporting black creators, but it’s still harder for P.O.C. to appear on the for you page and get the views and likes they deserve. White creators have been found impersonating black culture to get views and it’s because “Black creatives have long been the backbone of language, humor and trends on social media.” Many white content creators on the app have been appropriating black culture and stealing content from black creators. Black creators call out these white creators and sometimes even ask these white creators for their credit because they got viral off of stolen content, and these white creators never give them their credit. But this is TikTok’s fault too because they are more likely to promote a white person’s video than P.O.C.’s video. This affects P.O.C. because “When creators aren’t credited for popular trends, they risk losing out on both recognition and paychecks.” TikTok needs to pay more attention to the P.O.C. on the app and stop playing favorites. The community guidelines also have to be enforced, and the videos need to be reviewed thoroughly to see if they actually violate community guidelines. Black creators’ videos get taken down for no reason, and racist videos stay up even after getting reported, which is horrible.

In conclusion, TikTok needs to fix their community guidelines and actually review the videos being reported. They need to stop playing favorites and taking down videos for speaking out about racism instead of taking down racist videos. They need to support black creators more than they supposedly do because it honestly seems like they favor white creators. The racism on the app has to die down because it’s been tiring, and it holds P.O.C. back from reaching their full potential and from being noticed for their creativity and talent.

Disclaimer: The views and opinions expressed in this article are those of the author and/or student and do not necessarily reflect the official policy or position of United 4 Social Change Inc., its board members, or officers.
Tags:black creatorsBLMCensorshipfreedom of speechjusticeracismsilencedsocial activismSocial MediaTikTokYouth

I'm a high school graduate and I'm saving up for college. 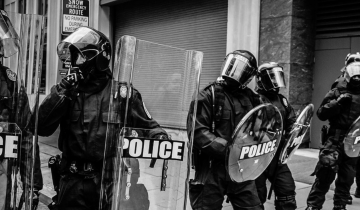