As the daughter of a first-generation immigrant, my parents, along with many others, are living proof that the immigration system affects many lives. According to the Pew Research Center, Immigrants in the U.S. make up 13.6% of the U.S. population and yet are still seen as threats. America is full of opportunities, which is solely the reason why it is so popular with immigration. Millions of people flee from persecution, war, and terrorism. While the U.S. attracts people of all cultures, religions, and ethnic backgrounds, immigrants have to now face racism, sexism, homophobia, etc. Gradually, as the economy is slowly recovering from the current recession, immigrants and minorities are working essential jobs that are important to our economy and communities. We as a society must be aware that immigrants shape this country. Seeking opportunity and a better life is something that we all aspire to do.

Despite the belief that immigrants are hurting Americans by taking jobs, they are contributing to the economy by adding new jobs and furthering American research in universities while enduring discrimination.

America is a nation built on immigrants. Essentially, if the government continues to preclude people from seeking new opportunities, it challenges the foundation of how the country was formed. It is said immigrants occupy American job opportunities. Contrary to popular belief, a considerable amount of undocumented workers do the more strenuous jobs that Americans simply do not want. According to the Center of Immigrant Studies, there are 93 occupations in which immigrants comprise 20% of the workforce. It is stated, “These high-immigrant occupations are primarily, but not exclusively, lower-wage jobs that require relatively little formal education.” The United States has been molded by progressive waves of immigration of the first colonists through today. Immigration results in an increase in jobs. Immigration brings new people with new ideas and innovation. Any immigrant coming to the U.S. can simply impact the economy by being consumers at new businesses. According to the American Immigration Council, that alone “sustains the jobs of the workers employed by those businesses.”

While many foreign students contribute greatly to research and development in the U.S., that opportunity may no longer exist due to the Trump administration. Due to the challenging time of COVID-19, many schools and universities have been obligated to transfer to remote online learning. It seems that with the election occurring soon, the Trump administration’s take on the immigration policies is speeding up rapidly. The new policy prohibits the entry of international students and encourages the departure of current foreign students. It seems as though the administration is doing everything in its power to stop all immigration. In a recent study at NAFSA, in the academic year of 2017-18, one million international students contributed $39 billion to the U.S. economy, leading to an increase in job support by 1.2% and a 5.8% increase to the U.S. revenue during the school year, supporting more than 455,622 jobs. Rather than mooching on the US welfare system, they help strengthen it. International students continuously contribute greatly to the U.S economy, but despite that, this country still manages to let down the people that make this country what is.

In recent years of the presidency, President Trump has hindered laws on immigration into the U.S. Thus, he has affected thousands of jobs and families, and is dividing America more than ever. He has recently suspended green cards and many work visas, putting many foreigner jobs at risk. Immigration restrictions have been heavily enforced by the Trump administration. The administration back in 2017, enacted a Muslim ban for 90 days. Countries included are the Muslim majority, such as Iran, Iraq, Libya, Somalia, Syrian, Sudan, and Yemen. However, it is inconceivable to believe that the intentions are not discriminatory. Each Muslim ban thereafter has had the same prejudiced intention of prohibiting Muslims from the U.S. Subsequently, Muslims in the U.S. experience the detriment of being ridiculed for their religious beliefs, and that alone drives their fear of not being welcomed in the U.S. People of the Islamic belief are just one of many that face indirect discrimination in the U.S. Religious and cultural misconceptions are simply microaggressions that lead to the discrimination that many immigrants face in America.

For many centuries, the U.S. has been looked upon as a land of opportunity and is known to provide “The American Dream”. If we as a society cannot accept that immigrants greatly impact our country, then we are simply a country built on lies. While it is a known fact that the U.S. is the land of freedom and opportunity if that is stripped away, what does that say about America? The solution begins with us. What is necessary is ultimately for the problem to be acknowledged rather than neglected. We must implement the idea that immigrants contribute greatly to not only the economy but also society. For years, US foreign policy has impacted many families. For that reason, we should support the ‘NO BAN Act’ that could prevent prejudiced bans from being implemented in the future. We as Americans should not support inequitable measures.

Disclaimer: The views and opinions expressed in this article are those of the author and/or student and do not necessarily reflect the official policy or position of United 4 Social Change Inc., its board members, or officers.
Tags:Economyimmigrationinternational studentsUnited States 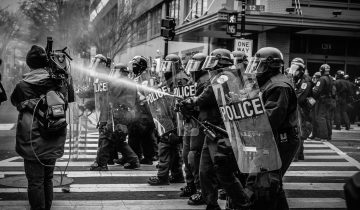