Biden’s America Is The Safe And Secure America We Need

In less than two months, Americans will make a monumental choice about the future of this country, in the midst of a raging pandemic, record unemployment, and economic turmoil. Americans will choose between two figures, one of whom hails mask-wearing and social-distancing as unnecessary, and another who condemns violence and relies on science to make decisions. It has become increasingly clear that President Trump wishes to paint Vice President Biden as some sort of puppet being controlled by socialist Democrats, whereas, truly, President Trump has been responsible for much of the chaos of the last few months. Despite Trump’s insistence that Joe Biden is an anarchist destined to turn this country into a socialist hellscape, Biden’s presidency represents a chance for this country to right itself and return to order because of his ability to ensure safety and stability in an uncertain time.

Currently, our nation is facing multiple, concurrent disasters. In addition to the Covid-19 pandemic, which is currently on track to claim the lives of more than 200,000 Americans, nightly protests against police brutality are now frequently ending in shootings and loss of life. Curiously, President Trump has taken the approach of claiming Americans will be less safe under a Biden presidency (despite current protests and fear) and promising they will continue under his leadership. The truth of this situation, however, is that we are currently living in President Trump’s America, meaning that the current state of the nation is his responsibility, not Biden’s. President Trump also refuses to condemn police brutality or violence against protestors coming from his own supporters during recent protests, an unsurprising fact given his own role in fomenting violence. According to this ABC News article, there have been 54 cases of violence linked to Donald Trump’s rhetoric as of May 2020, a number which likely has only risen since then. Some of Trump’s most criticized rhetoric has related to his negative opinions on immigrants, which were criticized harshly after a 2019 shooting in El Paso, Texas. His refusal to condemn violence has also in some cases led to violence from his supporters.

This past Monday, Biden fought back against Trump’s harmful characterization and asked the American people some important questions. Biden’s most compelling point came from the simple question: “are you safe in Donald Trump’s America?”, as stated in this Forbes News article. This question is compelling for many Americans, who are facing both the Covid-19 crisis and questions surrounding violence and safety in many cities. By asking this simple question, Joe Biden accurately captures the importance of having a leader who can be trusted to make the right decisions in times of great uncertainty. As we approach this November’s election, Joe Biden is painting himself as that marker of stability, an apt profile when compared to his opposition.

The America We Need

Not only is it crucial to elect Joe Biden because of his response to current crises, but it is also crucial that Joe Biden is the next leader of our nation as we look past this moment and into the future of our nation. Although many progressives have dismissed Biden as a meek moderate, important figures such as Bernie Sanders have characterized Biden with the possibility to be “the most progressive president since FDR”.

Biden has the proper skills to handle this crisis, such as experience in the executive branch and a willingness to create a federally-driven Covid-19 response, as stated in this Axios article. Biden is also already working to calm tensions and move in the right direction, such as in his recent visit to Kenosha, Wisconsin, in which he addressed both racial tensions and the future of schools during this pandemic.

Not only this, but he also has aggressive plans to handle other long-term crises, such as climate change and health care. Many progressives are now shifting as Biden reveals new plans, which once again paint him as a surprisingly progressive candidate, such as those related to police reform and the expansion of welfare.

As these two figures approach the November election, a few key issues are likely to rise to the top of everyone’s agendas, including Covid-19 and police brutality. As these topical issues are debated, it is important to also consider the values behind these disputes– freedom and safety among them. While these two things are more often than not pitted against one another, Joe Biden has the job of shedding light on how these things are connected, and the importance of valuing both in different settings. Those who don’t see the need to wear masks are often those concerned with re-starting our economy, issues which are inevitably connected, according to this article in Bloomberg. In order to unite this nation again, it is crucial that Biden emerges as the winner of this election, in order to prioritize the safety of communities and the protection of these rights.

How to Help Biden and Defeat Trump

In order to make a safer, more stable America reality, it is crucial that Democrats do everything possible to support Biden’s campaign and get others involved. As our very right to vote is threatened through voter suppression efforts by our president and others, be sure to have a secure voting plan, and encourage others to do the same. As difficult as it can be, try to have conversations with those who hold differing opinions, and discuss the all-important need to elect Vice President Biden. Making phone calls, writing Letters to the Editor, and sharing on social media about your support are also important ways to help this cause. This article from USA Today provides more important steps in defeating Trump, including ensuring voting is possible and safe and uniting the Democratic party.

Disclaimer: The views and opinions expressed in this article are those of the author and/or student and do not necessarily reflect the official policy or position of United 4 Social Change Inc., its board members, or officers.
Tags:BidenElectionpoliticstrumpvoting 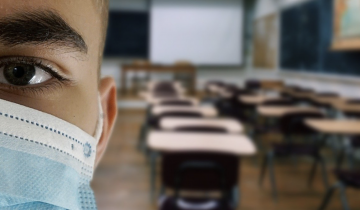